Flushing Benjamins Down The Toilet 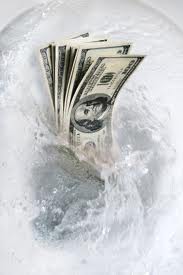 As you consider who to vote for up and down the ballot starting this month with early and absentee voting, keep this one thought in mind:

There is a huge difference you know.

We like to make the case like this simply put:  'Would you flush your hard-earned $100 Benjamin Franklin legal tender bills down the toilet every day for no good reason?'

Of course not.  You would have to be considered simply insane or at best, addled beyond repair.

Raising taxes without completely scouring the budget and eliminating every vestige of wasteful spending first and foremost is exactly like flushing your $100 bills down the toilet as we will soon explain.

Think about it this way: What sort of convoluted thinking would ever lead you to decide to spend more of your money on an investment that was clearly losing money every day because the managers of the business were simply incompetent and not managing the money the right way in your humble opinion?

That is what Congress has done for much of the time that the Republic has stood but especially markedly so over these past 20 years and really acutely so for the past 12 years.

Here's some things to think about:

1. Roughly 15-20% of all Medicare expenses are considered 'defensive' medical expenses which are essentially excessive procedures designed to do nothing for the patient's health and well-being and everything to do with protecting the doctors and hospitals from losing a major court case.

Estimated Annual Cost:  Roughly $1 trillion (including state and local share cost of Medicaid; 20% savings would be close to annual $200 billion to all government levels; close to $100 billion annually to Washington alone

2. Tens of billions of dollars in the annual defense budget are dedicated to programs that have very little to do with having the absolute best defense in the known world and much more to do with keeping constituents employed in the district or state of a powerful House or Senate defense appropriations committee chair.  Watch the dissolution of the defense industry plants along the coast of Alaska now that powerful Senate Defense Appropriations Chairman Ted Stevens is no longer in the Senate and has in fact, passed away.

3.  At least 10% of the benefits from both of the major entitlement programs in America, Social Security and Medicare are going to wealthy retirees, hardly any of whom will have contributed more to both programs than they will ever take out of each them (unless they die before eligibility or soon thereafter) Estimated annual savings:  $70 billion+ per year if reformed so that truly wealthy people provide for their own retirement, not the middle-class American taxpayer through their payroll taxes.

There is $200 billion or more in savings per year right there in 3 bullet points.

Given that the 'normal' level of federal tax collection in America has been around 18.5% of GDP for the past 30 years or so, that would mean that if this economy would ever respond to the economic policies of this Administration (the recent BLS job numbers for 2012 indicate that more people have left the work force than have found permanent well-paying jobs), we could expect to collect roughly $2.9 trillion in a normal year perhaps.

Coupling responsible federal budget cuts and reforms as mentioned above with a resumed 'normal' rate of growth in tax collections from a growing economy would put the US back on track towards balanced budgets and fiscal sanity in a matter of years, not decades.

Holding overall rates of annual growth in the entire US federal budget to around 2% would guarantee that our budgets would be balanced in the near-term and restore faith in the world credit markets that some adults have returned to the White House and Congress.

All without raising taxes by one penny on anyone.

Do your own calculations and see what you come up with.  CBO has millions of data points at www.cbo.gov.  Use them and see for yourself.

To learn more, visit InstitutePublicTrust.org
Posted by Frank Hill at 5:46 AM