The AARP: 'The Association of Advocacy for Ripping-Off (Young) People' 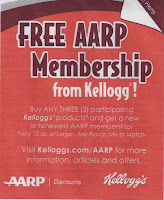 This is the last straw!

We can handle it when they, the AARP, the American Association of Retired Persons, 'say' they are not competing with for-profit insurance companies when, in fact, the AARP is one of the world's largest retailers of health care insurance, travel insurance and life insurance in the history of man.

We can handle the fact that the AARP has 44 million members and has stalwartly stood in the doorway to fiscal sanity in Washington not unlike George Wallace did in Alabama when he took a stand against integration. 'Social Security and Medicare Sanctity and Chastity in the past; in the Present and Forever in the Future!'

We can also swallow the almost-humorous line when the AARP says they are the most 'non-partisan' organization in history of Washington, D.C. We know for a fact that the AARP has engaged in some of the most vicious political campaigns against any candidate who dares to utter the following words of heresy:  'We need Social Security and Medicare reform now before the US slides into bankruptcy!'

The American political landscape is littered with the carcasses and skeletons of brave souls who have done so in the past...and not lived politically to be able to regret it.

But what we can not stomach is opening up a new box of Raisin Bran early in the morning, somewhat bleary-eyed, and read the following: 'Buy any 3 Kellogg's products and get a new or renewed AARP membership'!  A membership that only costs $10 to begin with!

Why not put this AARP promotion on a pack of prunes instead? Or how about some Depends adult diapers?

Are we that old and senile now, fellow Boomers? Can we really be 'bought' by a free membership to join one of the main reasons why we are leaving our children and their children with this enormous debt to pay off, the notorious AARP?

Is there no shame anymore? We are being bought out for 15% discounts on movie tickets and early-bird specials at Denny's and IHOP!

We can not think of another single organization in Washington that is more directly responsible for the exploding budget deficits than the AARP. We have looked and searched and hunted high-and-low for ANY indication or scrap from the historical archives that the AARP has actually proposed or supported any responsible budget solution that would take the inherent budget cost drivers out of the costs of Social Security, and more acutely, Medicare over the past 25 years....and we have come up flat empty.

Without blinking or suppressing laughter, the AARP maintains that every senior citizen, including Warren Buffett and other super-billionaires, deserve their full complement of entitlement spending once they pass the age of 65 for Medicare and 66 for Social Security. Why, it almost amounts to $3000/month for Mr. Buffett today! What would he do without Social Security to depend on?

Since we went to Washington in 1985, the AARP has stopped every single effort to put any common-sense reforms into SS and Medicare. The good people of Chile (Chile!) have a far more advanced and modern operating Social Security system they implemented 30 years ago where every Chilean citizen now has a significant nest-egg built up to retire on. (see Chilean plan below)

If you die 1 second before midnight the day before you turn 66 to become eligible to receive your first SS check of about $2000/month, you get nothing. Squadoosh. Zippo. After all those years of hard work and having money withheld from your weekly paychecks to something called 'FICA' that many people still do not know what it means.

That is crazy. And unfair. And far inferior to the private account system Chileans passed into law 30 years ago. Just about the time the Caliphates at the AARP decided to stand in the doorway to any common-sensical improvements to a system that is almost as old as the current Chicago Cubs World Series drought.

Nope. This is the last straw. We are not going to take it anymore. No more Kellogg's products bought any more, certainly not Raisin Bran. We think there should be a national uprising of every person under the age of 55 to do the same: boycott Kellogg's products for supporting such an organization as the AARP that routinely skirts the law to run their 'non-profit' (sic) financial empire with tax-advantaged status across-the-board and which engages in overt political activity in violation of their non-profit status.

And for those of you over the age of 55 who, for some reason, have already succumbed to the temptation of buying 3 Kellogg's cereals so you can get a free $10 membership to this monolithic organization in order to get 15% discounts on movie tickets, please tear up your card and ask the AARP for a refund.

They probably won't give it to you. But the only way to stop the AARP from destroying your children's future with their intransigence to common-sense budget solutions is to have their membership slowly start to dwindle from 44 million to 40 million; to 30 million and then down to 1 million members and then vanish into the sunset of history.

So stop buying Kellogg's cereals. Tell all your friends to do the same. Eat some prunes instead.

You'll feel better about yourself when you do all three.

May 1 marks the 30 years since Chile became the first nation to
privatize its social security system. By turning workers into
investors, the move solved an entitlement crisis much like the one
America faces today.

"I like symbols, so I chose May Day as the birth date of Chile's
'ownership society' that allowed every worker to become a small
capitalist," wrote Jose Pinera, former secretary of labor and social
security and the architect of this pension revolution. He is now a
senior fellow at the Cato Institute in Washington, D.C.

What he designed has succeeded beyond all expectations. Yet Congress
remains reluctant to adopt anything like it, despite efforts by
Presidents Bill Clinton and George W. Bush to partially privatize an
American system.

Instead of paying a 12.4% Social Security tax as we do here, Chilean
workers must pay in 10% of their wages (they can send up to 20%) to
one of several conservatively managed and regulated pension funds.

From the accumulated savings, they get a life annuity or make
programmed withdrawals (inheriting any funds left over).Over the last three decades these accounts have averaged annual returns of 9.23% above inflation. By contrast, U.S. Social Security pays a 1% to 2% (theoretical) return, and even less for new workers.

History shows that pension funds prudently invested in a diversified
portfolio appreciate significantly over long periods of consistent
saving. In 1981, the Dow industrials stood at 900; today, despite
three market crashes, it's nearly 13,000.

In 2005, New York Times reporter John Tierney worked out his own
Social Security contributions on the Chilean model and found that his
privatized pension would have been $53,000 a year plus a one-time
payout of $223,000. The same contributions paid into Social Security
would have paid him $18,000.

The system is doable here, but does require citizen education and
political resolve.

First, implicit debts must be made explicit, which most politicians abhor.
Chile decided to compensate workers for money already paid into the
system, through "recognition bonds." It financed this via bonds,
partial diversions of existing pension taxes, sales of state assets
and spending cuts.

Its road was made even easier as economic growth from a system that
encourages work, saving and responsibility filled government coffers
with new streams of tax revenue.

In the U.S., Social Security already is in bad shape. It's already
paying out more in benefits than it gets in payroll tax revenue.

Politicians for decades have raided excess workers' contributions
intended to cover baby boomer retirees. They left IOUs, giving the
program the right to other government revenue. But that means the
Treasury has to issue even more debt.

Those political raids can't happen in Chile — private accounts are
legal property, a right Pinera embedded firmly into the 1980
constitution.

As for Social Security, even the IOUs are projected to run out in
2037. If nothing is done, payouts will have to be slashed 22%.
Private accounts could generate better returns to help offset likely
benefit cuts.

Yet U.S. reform efforts have been timid. Rep. Paul Ryan's "Road Map"
called for creating personal retirement accounts with one-third of
Social Security funds. But his 10-year House budget did not explicitly
address the retirement program.

Given what's at stake, it's surprising that there is no bold proposal
to "take the bull by the horns," as Pinera put it, and reform Social
Security completely on the Chile model. Missing this is missing a big
one.