Let's Look At The American Budget Deficit Fiasco As If You Were The Chinese Finance Minister.... 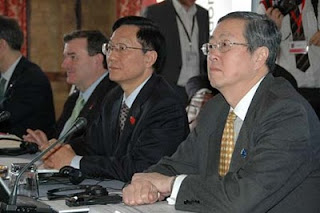 Suppose you are Xie Zuran (second from right) and you have the enviable (unenviable?) job as Minister of Finance for the People's Republic of China.

(It is still so odd to see the word "republic' being applied to both the communist government of China and the free representative democracy of the United States at the same time.  Especially when many people think there is more 'free enterprise' going on in China today than in America...mull on that for a moment)

If we were Mr. Zuran, here's what we think we would say to the US Treasury Secretary or President Obama direct to his face about the potential repeal of the Bush Tax Cuts.  It would be the sort of conversation that highlights the hidden, but deadly dangers of getting too over-extended with debt to foreign bond-holders:


"Are you completely out of your mind, Mr. President?
You shouldn't be considering any extension of the Bush Tax Cuts, at all, ever!  Let them expire; you have to, Mr. President!

We, the Chinese, the best friend you Americans have had in the world when it comes to financing your debt since the Dutch from 1776-1789, are now sitting on over $1 trillion in dollar-denominated bonds and financial instruments, including cash.

We have been the largest and most consistent purchaser of your debt offerings over the past decade when your country, for some unknown reason to us, has decided to spend way beyond your means and abandon all known principles of sound financial management.

We thought the US was the World's Greatest Financial Power but what you are doing now is sort of crazy to us, to be honest about it.  We will keep buying your debt and cash instruments....but only as long as we think it will hold its value and we will not suffer financially from doing so.

We implore you to allow all of the Bush Tax Cuts to expire at the end of 2010. In fact, as a precondition for buying more US debt, we are demanding that you do so or else we will be less inclined to buy any more of your debt until and unless you get a handle on your deficit and debt problems.

The most immediate thing you can do that will show us that you are 'serious' about tackling your budget deficits would be to allow all of these Bush Tax Cuts to expire on December 31, 2010.  Go ahead; you desperately need $200-$300 billion of increased tax revenues per year to flow into the coffers of the US Treasury in Washington, DC from here on out and reduce these enormous budget deficits by at least 25% annually. Forever, now it seems.

We really don't care if you raise taxes or cut federal spending to balance your budgets.  What we want, and are demanding you do, is to radically reduce your budget deficits to significantly lessen the risk that the dollar will continue sliding in value.  Have you seen what happened to the euro when the Greek budget disaster erupted?  The euro is diving faster than the cormorants we Chinese use to fish with!

We know that whatever you do, you will always want to buy cheap imports from China for the foreseeable future.  And you will be dependent on our willingness to use the dollars you send to us to pay for cheap underwear to buy back your debt for a long time as well.

So you have got to take us seriously, Mr. President.  Just like Mexico and all of the Latin American countries who have had severe financial crises in the past.  They all had arrogant American 'demands' to 'get their financial house in order' shoved down their throats before any more IMF loans or aid was offered from Washington.

I'll bet you are sorry to see the shoe on the other foot now, huh, Mr. President?

Let the Bush Tax Cuts die.  Completely. In total. Or else!

I am remain your humble and sincere friend. Believe it or not.