“Keep Your Government Hands Off MY Medicare!” 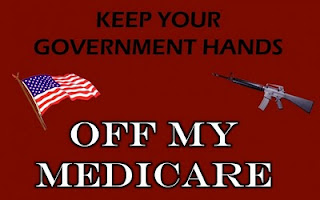 This is one of our favorite signs from the entire healthcare debate over the past year.

If the federal government does not have its grubby big old hands all over the current Medicare system, then who does?  The Tooth Fairy?  Santa Claus?  The guy from the Monopoly game with all his funny money?

We recently highlighted the apparent philosophical inconsistency when people who love more government, for the best altruistic reasons, decide not to send their tax refund back to Washington to help pay for expansion of government services they strongly support, i.e. health care reform under President Obama and Speaker Pelosi.

On the exact flipside of the parallel universe are the people who, well-intentioned they may be, are seen holding signs such as this one above, screaming in protest against any ‘more socialism in America!’ all the while receiving enormous sums of federal taxpayer-supported programs such as Medicare.

Receiving copious amounts of taxpayer assistance in any form, ladies and gentlemen, is the very definition of 'socialism'.  We have had socialism creeping into our previously independent American cowboy psyche for at least the past 80 years or so in some form of government program or another.

Some of it has been progress like Social Security. It started as the 'Supplemental Security System' designed to get money to our moms and dads and grandparents who were starving during the Truly Large Recession That Turned into The Great Depression Because of Stupid Misguided Policies Like Raising Taxes, Cutting Spending and Limiting Free Trade.  But universal coverage and an ever-growing population has a way of turning even the best, most altruistic programs of 80 years ago into something that are just simply unsustainable going forward given the laws of economics, finance and taxes.

Something has got to give, people.  We can’t have ‘everything for nothing’ and not pay for everything you may want government to provide for everyone else.  What is it going to be?

It is time to make some fundamental, hard decisions about what we want our government to do and, more importantly, NOT do. Then we can proceed with some firm set of political principles based on facts and figures, not emotions and polemics.

We personally support a government that defends our borders and provides a safety net to those who are physically or mentally incapable of providing for themselves.  We don't think the Founders would be very happy seeing a welfare state that encompasses even the very wealthy in our society and a tax system riddled with all sorts of special tax favors for this set of special interests (meaning ones we agree with) or that set of special interests (meaning those you support).

Here’s the truth about our current America health care system, to return to the sign above.  It is already a form of ‘socialized medicine’ whether we want to admit it or not.  50% of every dollar spent on health care in America today comes from a federal or state government source of funding in Medicare, Medicaid, HHS, or research from any of the alphabet-soup named agencies ranging from NIH to CDC.

The debate over Obamacare was not about replacing it with a pure private-based market system; it was about whether to push it more towards a complete socialized system more like the ones currently in play in Europe and Canada. And apparently, that is where we are heading even as HHS came out with a report that shows ObamaCare increasing the cost of health care, not decreasing it.

Remember, there are at least 3 intervening elections that have to take place before Obamacare becomes fully operational, if ever, in this nation.

Here’s some basic, useful and yet ‘inconvenient truths’ about Medicare that you should burn into your memory banks:

-Medicare is NOT an insurance plan but a government-funded (read: 'Taxpayer Dollars') program that redistributes money from people like you to pay for the majority of every single senior citizens’ health care bills each and every year.

-Medicare Part B is a mandatory-enrollment (meaning everyone is forced into it whether they can afford their own health care plans or not, like Warren Buffett or Bill Gates) federal program that is fully 75% paid for by taxpayers, not seniors.

-The average senior pays about $300-$325/month for Medicare Part B health care coverage for physician visits and care. You, the American taxpayer, pays the balance of about $900-$1200/month per senior citizen. Times 40 million seniors. And now about to explode in number with millions of retiring Boomers. You do the math.

-Medicare Part A is the hospital reimbursement part of senior health care paid for by current worker’s contributions through the FICA tax withholding on every one of your paychecks.  Part A is just about to go into the red because there are not enough current workers (especially in this nasty recession) paying current payroll taxes into the Part A program to cover all the hospital costs of senior citizens.

-We don't have time to go into Medicare Parts C and D and any of the new Parts E-Z created  by Obamacare but you get the bottom line:  we can't afford all of these programs either.

- Medicare and our current private health care plans are NOT insurance plans in the strictest sense of the word.  They are ‘health care payment’ plans that pay all health care costs ranging from checkups to minor problems.  A true ‘insurance’ plan would invest money in a risk-managed, actuarial program to cover the catastrophic costs of large adverse medical outcomes such as heart attacks, cancer or car accidents for a very small percentage of people each year and leave the smaller costs to be paid out-of-pocket by every patient. The premiums for such a catastrophic high-end national plan would be dramatically smaller across-the-board and the American health care system could be saved, hopefully.

We do not need any more pandering or lip service coming out of either major political party in Washington. And with the advent of the Tea Party and the rise of registered Independent voters now approaching 35% in many states, we don't need them to be walking around with signs like the one above that are completely incorrect at their core.

For the past 230 years of our history, the people have chosen wisely when leaders have leveled with them about the threats we have faced from the British, from slavery, from Japan, from communism.  They will do so again when our leaders speak candidly and stop hiding behind the veil of PR advisors and spin by sycophantic* hangers-on.

'Approval Ratings' never got us out of any trouble before.  Leaders have.

* comes from the Latin meaning 'slanderer' or 'swindler' which is appropriate
Posted by Frank Hill at 6:35 AM