Air-Conditioned Doghouses and the VAT 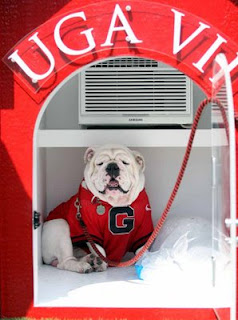 What is the VAT or Value-Added Tax anyway and why would we Americans want anything that resembles the tax structure of Europe?

The VAT is sort of a national excise tax except that it is applied to every marginal level of ‘value-added’ during the production process when a transaction is made. For example, when an agricultural distributor ships corn to Frito-Lay to make chips, Frito-Lay would pay a VAT tax on the ‘value-added’ (work input, including the brains and talent to do it in the first place) by the distributor for collecting all the corn, processing it and then putting it in a truck or train container to get it to Frito-Lay.

There is ‘value-added’ at every step of the way for successful businesses, believe it or not. The current prevailing attitude emanating from Washington that damns all private enterprise activities has got to stop before we run every productive person and business out of business.No one in the Obama Adminstration or the current leadership in Congress seems to have any appreciation for the free enterprise system in any way, shape or form.

After all, they can’t redistribute any wealth if it is not created in the first place by hard-working people in the private sector, not the public sector.

But here is why the VAT would be such an improvement over the current tax system in America: It would be far more simple and would not discourage the investment and savings we desperately need right now to reinvigorate our economy.

Think about it for a minute. What would you do if suddenly you had 20% of your entire income back in your own hands that you would no longer send to Washington through payroll taxes and income taxes? (if you are self-employed, your payroll tax bite is over 15.7% right now alone)

Would you: A) spend it all; B) put it into savings: C) Pay off credit cards, car payments or mortgages; or D) invest it in a new business on your own or in the stock market?

Answer: ALL of these are good things for the economy. There is absolutely zero downside to Americans reducing debt, saving more, investing or buying your neighbors’ products and services which means more jobs for your friends and neighbors.

What are the downsides for the VAT? #1 is the regressive nature of the tax. People with lower incomes would be harder pressed to pay the increased prices of products and services and measures would need to be taken to help them. And if the VAT were set at say, 19%, prices would rise to cover that tax at every step of the way.

But just how much will they rise across-the-board? No one knows for sure. One thing that is often over-looked is that everyone is already paying for corporate income and payroll taxes in terms of higher prices for goods and services they pay today! All the VAT would do is roll all our federal taxation needs into one program, not thousands, and basically tax those who consume the most, including expensive yachts, massive homes and Rolls Royces.

The very first debate on the floor of Congress in 1789 was over a similar 'consumption tax' of sorts, the import duty fees. After all, now that they had a new country to run, they had to find some way to pay for it, didn't they?

One thing we do know for sure: Without the mind-numbing labyrinth of confusing personal and corporate income taxes to deal with, decisions on buying and investing will return solely to the economic fundamentals of each decision, not on the tax ramifications of every decision.

And here is the best part for those of you are concerned about ‘progressivity’ of the tax code: Rich people will pay more than their fair share in taxes every single year! Why? Because all of the deductions for massive $4 million second homes on the coast will disappear as well as every other tax loophole that only very wealthy people can afford to pay tax lawyers and accountants to find for them.

Our favorite example of how great the free enterprise system really is was when Jim and Tammy Faye Bakker of PTL fame and fortune were accused of having used funds to pay for an air-conditioned doghouse and gold-plated faucets in their spacious mansion. Many people were understandably upset to find out that funds they were donating to advance the Good News were instead being used to keep Fido cool in the hot and humid heat of the Carolina summers.

We shared that concern but were more than amazed that some guy had figured out a way to manufacture and sell air-conditioned doghouses in the first place! Those expensive doghouses were made by someone and we hope they were made by hundreds of craftsmen here in the States and not in China.

Think of the taxes that could be generated off the value-added at each step in the air-conditioned doghouse process...we could pay off the national debt with those cash-flows.

The VAT has a lot going for it but only as a complete replacement for the current insane system that really doesn’t work very well any more, not as an add-on.

UGA VI I picture courtesy of http://georgiasports.blogspot.com/2008/09/uga-vii-pictures-from-gsu-game.html
Posted by Frank Hill at 5:59 PM