Who Has Created More Jobs: Bill Gates or the Federal Government? 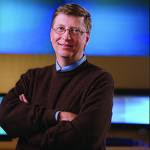 There is a pretty important and somewhat disturbing trend going on out there on college campuses that we wanted to bring to your attention.

According to a well-placed source of ours, (i.e. someone who really knows what they are talking about), 36% of American college students believe socialism is a better form of government than one based on free market capitalism.

Well, we are about to find out if that hypothesis is true or not, now aren’t we? Either we believe the private sector is going to absorb all these new graduates this spring or we believe the government is supposed to try to create jobs for them. Which do you believe works best?


Here is a Jeopardy question to you college kids: “Who has created more jobs for the American worker…Bill Gates by his lonesome self (along with his team of Mensas, of course,) or the recent Obama economic ‘stimulus’ (sic, really?) plan?

According to the official Microsoft website, there are currently just under 90,000 people employed directly by Microsoft, meaning drawing a paycheck and getting health care insurance mostly funded by the corporation, for now at least.

According to Survey Watch, only 140,000 new jobs have been created in the private sector since the passage of the $780 billion Stimulus Bill last spring. The rest were public sector jobs such as teachers and public safety officers that were not created but ‘saved’ from oblivion (meaning states got federal money to pay for them since states were so strapped for cash).

Wait a minute! You mean that Bill Gates all by his lonesome is now employing at Microsoft 60% as many people as the whole stimulus package supposedly created in 2009 for the entire country?

Let’s take a deeper look at this.  Since Microsoft was incorporated in 1981, how many people have worked directly at Microsoft proper? Let’s just say an average of 50,000 people per year were employees of Microsoft over the past 30 years. (Hard to believe that company has only been around 30 years, isn’t it?)

Some, if not many, people have worked there for the bulk of those 30 years. We would assume the turnover is relatively low because it is such a great company to work for, they have great benefits, and for those who got in early, their stock holdings must be worth millions by now, even with this nasty recession.

So let's say 1 million people have worked at Microsoft over time, give or take 50,000 or so.

What about all of the companies that have sprung up over that time because of the ubiquitous use of Microsoft software? All of the data management companies, software applications engineers, video games, virtually all of the internet programs and processes….they all have been made possible by the creation of one company by one man who helped usher in the Information Technology Age much like the Industrialization Age of the latter part of the 19th century. According to various sources, close to 7 million jobs in America are directly in IT.

Add in all those other jobs that would not exist without Microsoft software and applications and you are now talking about tens of millions of jobs right here in the good old U.S. of A.

And all the federal government could come up with was a 'measly' 140,000 private sector jobs supposedly created with this enormous spending package?

Our point here is not to bury the federal government, nor to praise it either. We don’t believe Presidents can create jobs out of thin air; they get entirely way too much credit when the economy expands and way too much blame when the economy turns sour (except maybe Hoover who advocated exactly the wrong economic policies at precisely the wrong time and the dumb Congress at the time passed them all into law)

The federal government actually did have a hand in developing things like Tang and Sudafed, used first by the astronauts; semiconductors, again used by NASA and the military; and the Internet, which was developed to provide communications in a post-nuclear war world should it ever come to that. DoD, NASA and DARPA used federal appropriations for research and development purposes to help keep us safe and to put a few men on the moon. However, it took the private sector and some brilliant engineers and marketing people to take all those ideas and run with them to produce products for the mass consuming public.

Shouldn’t we try to stimulate the creation of the next Microsoft by the next Bill Gates so they can create millions of new on-going jobs to get out of the nasty recession?  We are being asked to spend hundreds of billions of taxpayer dollars to build a bunch of new bridges and roads which will create jobs but they will disappear once the projects are completed.

Will the next ‘Microsoft’ come out of some government works program or someone’s brilliant mind, hard work and persistence as they fill a market need?  We think the landscape of American business and ingenuity is just teeming with new ideas to become major new businesses.  We just need to allow them the incentives to do so and get out of the way.  Today.

Something to think about….we used public infrastructure and works programs to get out of the Great Big Depression in the 1930’s but it took 10 years and didn’t really get the US out of the doldrums until WWII came along and we had full employment supporting the war effort.

We don’t think the Obama Stimulus Package ‘Part Deux’ is going to be anymore successful than the first one. We need to spark the imagination and desire of businesspeople to invest and expand their business right now.

We continue to suggest abolishing the corporate income tax code and let entrepreneurs and business risk-takers do what they do best and create more businesses and jobs, just like good old Bill Gates has done. (He is only 54, by the way, if you can believe that)

You'll be glad they did.