Capitol Hill: 'The Graveyard of the Atlantic' for Budget Commissions 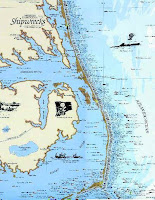 There were so many shipwrecks off the coast of North Carolina at Cape Hatteras that the area became known as the "Graveyard of the Atlantic'.  Pretty gruesome title for such a beautiful coast.
In a similar vein of thought, President Obama's recent pronouncement calling for another 'commission' by executive order to study what is wrong with our federal budget and report back to him and Congress about what can be done to get us out of this mess should be received by a national collective groan and a scream of "Oh, no!  Not another one of those!  Please!"

It is a dumb idea whose time has come and gone.  Like 18 times since 1975.  All great ideas, all great people, (of course, we thought we were on the greatest one in 1994), all great commissions.  All shipwrecked once they crossed the Potomac and sunk to the bottom of the Reflecting Pool in front of the Capitol, never to be seen again.

Commissions on budgets and entitlements are a complete political dodge by those in power.  They are almost as cowardly as passing along this enormous debt to our children and grandchildren.

We already have a 'commission' to study and make decisions on changing federal spending and we call that thing the "U.S. Congress"!  And it is the ONLY Constitutionally-established body in this country that has the authority to make decisions on our behalf to raise taxes and make spending decisions for our Republic on an annual basis.

Let's take a brief run down memory lane.  See if you can check off which ones made any dent at all at the inexorable rise in federal spending, mostly in the entitlement program area: (please read any and all of them...they say the same thing)

So here we are almost 36 years later after first budget commission, which was, of course, on Social Security, and Congress just raised the debt ceiling to $14.9 trillion this past week.  So how are these commissions working out for you?


Anti-slavery proponents did not hide behind the veil of a 'bipartisan commission' in England or America in the 19th century.  Brave souls such as William Wilberforce talked openly and with conviction about abolishing the slave trade and slavery itself in the broad daylight, ran on a platform to do so and worked within Parliament to achieve that noble end.