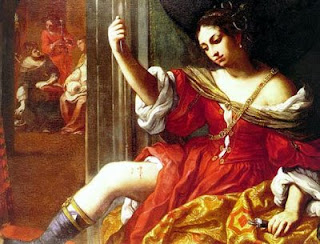 The austere and virtuous Porcia was the daughter of the true 'first citizen' of Rome, Cato. After the victory of Octavian Caesar at the final civil war battle of Phillippi:

"When (the news) arrived, and she learned that both her brother and her husband, Brutus, were dead, she slipped free from the grasp of her friends, who had feared what she might do, ran to a brazier, and swallowed burning coals. Women, after all, were Romans too."

(from Rubicon, The Last Years of the Roman Empire, by Tom Holland, p.351)