Commit These Charts To Memory

These might be the most important charts you will ever see.

(Charts courtesy of the Peter G. Peterson Foundation....see link on right side of column for more information) 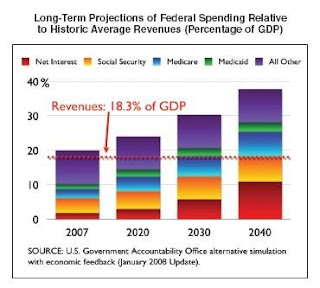 You can almost bet whatever is left in your stock portfolio or 401(k) plan that revenues sent to Washington in the future will never exceed 21% of GDP, regardless of any new tax scheme that might be thought of or passed in Washington. It has never happened in modern times since at least 1970. 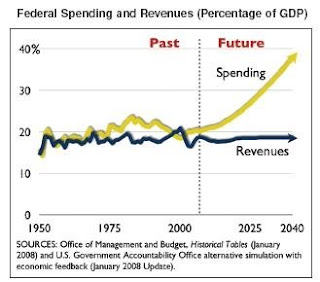 This second chart pretty much sums up the difficulty we are going to have as a nation going forward unless we do something dramatically different today with regards to the long-term structural problems inherent in the way we deliver services and payments through Social Security, Medicare and Medicaid. Net interest is a growing problem due to the enormous amount of debt we have run up since 2000 and will increase by close to 50% more in the next 4 years.

Commit these charts to memory and keep them close at hand and readily accessible as you wade through the daily news, television and radio broadcasts and talk shows.

If they aren't talking about how to solve these issues, then they are just blowing smoke and avoiding the really huge problems we face. The more they fixate on the issue of the day, the less they will have to do to their homework and help figure out what we are going to do as a country to solve these problems for us and for our children and grandchildren.

As important and critical as the issues might seem today such as the War in Iraq or Afghanistan, banking bailouts, economic stimulus plans, global warming and climate change legislation or the housing bailouts, none of them compare with the magnitude and the scope of the problems we are now facing with regard to the tsunami coming at us in terms of being able to pay for the entitlement programs in the future.

The day of that reckoning might make this current economic crisis look like a walk in the park, without trying to be overly alarmist about it. Economic forecasting experts and Federal Reserve chairmen from Paul Volcker to Alan Greenspan to Ben Bernancke have said as much for the past 30 years in testimony to Congress in their typically understated manner, so as to not roil the markets at the time.

Since the markets have already been "roiled" lately, ("roiled" being a great word of unknown origin meaning 'to stir up sediment or dregs in a turbulent, violent way'), we might as well face the facts and deal with the problems head-on, like Americans have always been able to do so in the past.

Now is our time to deal with a huge national issue with intelligence, honesty and truth. From our citizens as well as our elected leaders.
Posted by Frank Hill at 9:16 AM