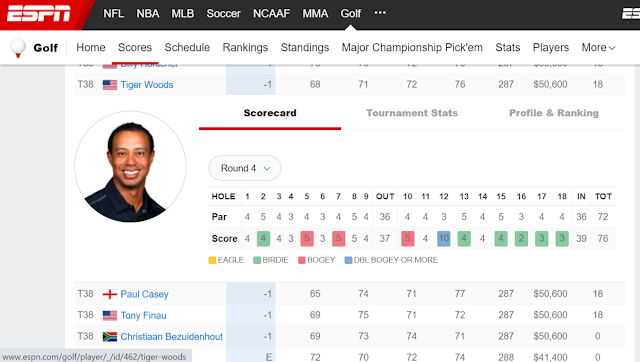 Dustin Johnson won the 2020 Masters in record-breaking fashion with a dominating five-stroke victory at Augusta National.
Tiger Woods did something many golfers consider to be even more impossible, and it was hardly even reported or covered during the broadcast or the media reports the next day.
Defending champion and five-time Masters green jacket winner Tiger Woods trailed Dustin Johnson by 11 shots heading into the final round Sunday — not a totally impossible lead to overcome, given Tiger’s history of playing extremely well in the last round of the 15 majors he has won and Johnson’s history of not finishing well in three other majors he led heading into Sunday, but difficult nonetheless.
Tiger got off to a solid start, parring the first hole and putting for eagle on the par 5 second hole, before settling for a birdie. He stumbled with bogeys on three of the next eight holes, taking him out of any serious contention to win his 16th major.
He had eight holes to play. Real golfers know they can’t give up when they know they can’t win. They have to finish the round they started barring severe injury and do the best they can.
He parred the 11th hole before stepping up to the most treacherous, and shortest, hole at Augusta National, the 155-yard par 3 12th hole, called Golden Bell after a bright yellow forsythia shrub.
The tee shot at the 12th hole at Augusta is one of the most terrifying shots in all golf. There is a landing area about 15 feet in diameter on the green where you have to hit your shot in order to have any chance at a par, much less a birdie. The green is usually slick as ice and any ball that lands short of the green almost always rolls back into Rae’s Creek.
Tiger hit his first shot on the front fringe of the green and, sure enough, it rolled back into the creek for a one-shot penalty. He hit his next shot, his third due to the penalty, and it, too, hit the green but had enough backspin that it rolled back into Rae’s Creek for another one stroke penalty.
He pulled out another ball to hit from the fairway side of the creek, his sixth shot. Remember: this is Tiger Woods, five-time Masters champion and one of the two greatest golfers in history, Jack Nicklaus being the other, making these mistakes, not some weekend hacker.
It hit the green hard and landed in the back bunker often described as treacherous. From a very awkward stance, he hit his sand shot too low and too hard and it skittered across the green and back into Rae’s Creek once again for a third penalty stroke. He pulled out another ball; pitched it onto the green lying eight and then two-putted for a 10.
There is no label for seven strokes over par on a single hole as there is for a double, triple or quadruple bogey. There are no words for the humiliation and dejection any golfer experiences who makes a 10 on a par 3, especially with 13 million people watching on television.
Somehow in some other-worldly way, Tiger Woods maintained his composure as he walked to the 13th tee. He birdied the par 5 and then parred No. 14 before doing what really is impossible for other mortal golfers: he birdied the next four holes in succession, the par 5 15th hole, the par 3 16th hole, the par 4 17th hole and the par 4 18th hole, to finish with a closing round 76 to finish the tournament tied for 38th.
Tiger Woods went from experiencing the worst hole of his long and storied career to his best score ever over the final six holes at the Masters in less than 90 minutes. How can anyone recover mentally and emotionally from such a disaster in such a short period of time to produce such extraordinary results?
Golf is just a game but sometimes it teaches life lessons we never forget. The main lesson is sportsmanship; golfers are the only athletes who call penalties on themselves to honor the rules of the game. Imagine such an ethic existing in every other aspect of life from business to politics to friends and family.
But in this almost unreported example, Tiger Woods teaches us to be resilient, to never give up, to take what life deals us and try to be excellent in whatever we do each time we do it.
There are some life lessons for us as a nation in that as well.
(first published in North State Journal 11/18/20)