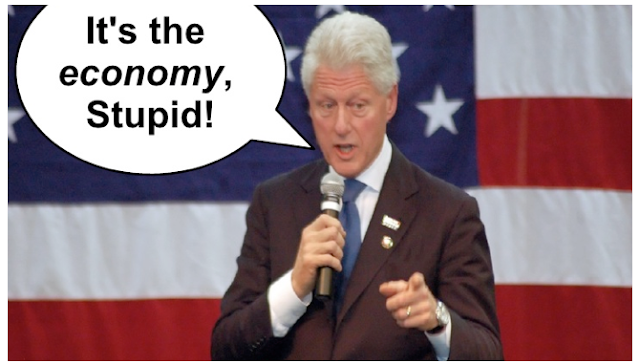 "There's something happening here. What it is ain't exactly clear” are the opening lines to the 1966 Buffalo Springfield hit song, “For What It’s Worth”.

For what it is worth, the same can be said about recent economic data in America. “Everyone”, meaning all of the experts and commentators on talk shows, keep predicting a significant slowdown of the American economy and have done so since the night Donald Trump was elected in 2016.

Nobel Laureate Paul Krugman proudly wrote in the New York Times in the wee hours after Trump won the electoral college: “If the question is when markets will recover, a first-pass answer is never”.

Ouch. One has to think Mr. Krugman wished he could have a do-over with that colossal gaffe.

Except apparently he doesn’t. On April 8, 2019, only 23 days ago, he wrote: 'It’s true that U.S. economic growth got a bump for two quarters last year, and Trumpists are still pretending to believe that we’ll have great growth for a decade. But at this point last year’s growth is looking like a brief and rapidly fading sugar high”.

First quarter 2019 GDP growth came in at 3.2% last Friday. The consensus among professional economists and prognosticators was 2%.

What has happened? Has every economist turned into a non-analytical clone of Paul Krugman? Why has the source of this new-found economic growth not been “exactly clear” for everyone to see?

One important factor could be the higher 1-year write-off of the purchase cost of new machinery and equipment for small businesses in the Trump tax bill. Business owners point to this tax change as being an underappreciated aspect of the accelerated economic growth we are seeing in the US economy.

A small business contractor can buy a new truck and expense the whole cost of the vehicle in the first year even though it might take 5-7 years to pay for the loan. If a small business had $45,000 of net profit, they could offset that with the $45,000 cost of the new vehicle and drive their taxable income way down to cite one very simple example. Depending on their tax bracket, the owner could save up to $15,000 in federal taxes and $2000 in state taxes which is money that stays in their pocket, not the government’s.

Economic growth is directly attributable to productivity gains in the economy. Buying new machines that can produce more product at a lower cost is the very definition of “productivity gains”. We all benefit from such productivity gains whether we are employees, owners, investors, stockholders or retired from the workforce.

Former Vice-President-under-President-Barack-Obama Joe Biden entered the presidential race last week ostensibly to “take America back to the golden days” he apparently thought happened while he and President Obama were leading our country.

Americans throughout modern history have considered 2% annual real growth “dismal” and “disappointing”. Former President Obama and his Vice-President Joe Biden considered 2% to be the “new normal” for the American economy going forward. Forever.

Annual real GDP growth never exceeded 2% during any of the 8 years the Obama/Biden team was in charge. How odd that as soon as they left office, GDP is now growing almost 60% faster under the pro-free enterprise policies of President Trump as passed by a Republican Congress with zero Democratic votes.

If you want to know one big difference between the Obama and Trump White Houses, consider that in 8 years, the Obama Administration did not add this provision to help spur the economy back to full health.

The difference between 1% GDP annual growth to 3% GDP growth across 35 years, about a generation, would mean the US economy would double from $21.5 trillion to $43 trillion in 2054.

For what it’s worth 3.2% growth is far preferable to 2.0%. Why go backwards into the future?