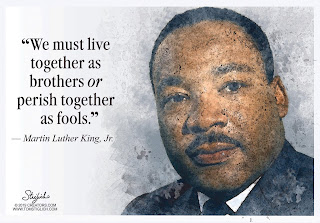 “You see, the Founding Fathers were really influenced by the Bible.

“The whole concept of the ‘imago dei,’ as it is expressed in Latin, the ‘image of God,’ is the idea that all men have something within them that God injected.

“Not that they have substantial unity with God, but that every man has a capacity to have fellowship with God. And this gives him a uniqueness, it gives him worth, it gives him dignity.

“And we must never forget this as a nation: there are no gradations in the image of God.

“Every man from a treble white to a bass black is significant on God’s keyboard, precisely because every man is made in the image of God.

“One day we will learn that.

“We will know one day that God made us to live together as brothers and to respect the dignity and worth of every man.”

In 1710, the Rev. John Wise, a Congregationalist minister in Massachusetts, preached from the pulpit: “Every man must be acknowledged to be equal to every man. … The end of all good government is to cultivate humanity and promote the happiness of all and the good of every man in all his rights, his life, liberty, estate, honor…”

The Rev. Wise would preach to the American colonists that democracy is God’s chosen form of government for both the church and the state because it relies on the natural state of man being made free by God in the first place over civil government having dominion over them.

It was certainly preferable over rule by a single fallible, fallen creature monarch, the King of England at that time.

He was not advocating the establishment of America as a theocracy to be ruled by church leaders. He was talking about every citizen having been given the equal natural right by God to pursue their happiness and not live under a dictator or tyrant who demanded they pay taxes to support their rule first over pursuing their own personal dreams and ambitions.

The same ideals John Wise preached were the same ideals MLK preached 250 years later for everyone, including African-Americans and women who were excluded before at the time of the Rev. Wise’s preaching. Equality, liberty, popular sovereignty and individual rights were the same ideals people hoped for in the 18th century as they were in the 20th and now in the 21st century.

In a speech commemorating the 150th anniversary of the Declaration of Independence, President Calvin Coolidge expounded on the sermons of the Rev. Wise and said: “Governments do not make ideals, but ideals make government.”

Any law or regulation that restricts entry or competition in a marketplace of ideas, products or services is less than “ideal.” It contradicts the natural law freedom of that person to pursue their happiness and provide for themselves and their family.

We cannot unwind the mistakes of the past. We can set a course for the future to “live together as brothers” and “respect the dignity and worth of every man” as the Rev. King wished for in his “American Dream” sermon by encouraging more freedom, not less, in every aspect of American life.

America was not perfect at the beginning. We certainly are not perfect now. The only way we can make this a “more perfect Union,” and we have to keep trying, is through our currently existing democratic republic form of representative democracy.

Not through an experiment with “free-for-all” (except the taxpayers) democratic socialism.

You will never hear anyone talk about “republican socialism.” It would antithetical to the principles of natural law individual freedom expressed by both the Revs. John Wise and Martin Luther King Jr. 250 years apart.

Forced involuntary socialism is not God’s government. Democratic republicanism is. Let’s keep it that way.