What If Hillary Had Won? 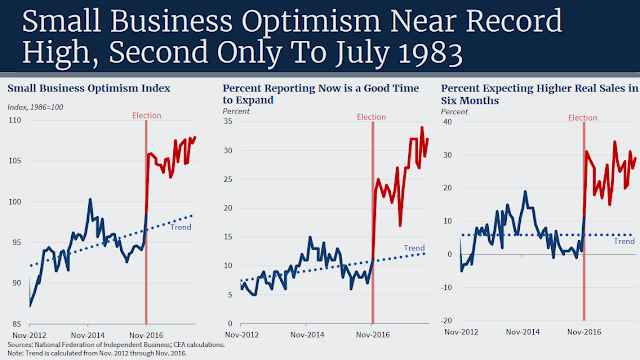 Where would we be today?

We would still be languishing in the throes of the economic malaise we endured for 8 long years under President Barack Obama. The same policies that never produced more than 1.9% annual GDP growth for 8 years from 2009-2017.

The question for everyone as we head into the election season this fall is this:


‘Are you economically better off than you were 2 short years ago?’

Had Hillary Clinton been elected President, here’s where we would be today:


The election of Donald Trump over Hillary Clinton triggered a massive sense of relief in the business sector and unleashed ‘the animal spirits’ of entrepreneurs nationwide as Adam Smith would have said. The Council of Economic Advisers point towards the demarcation point as being November 8, Election Night 2016. (see chart)

Not one day before.


IF such an explosion of confidence had happened during any of the 8 long years that President Obama was setting policy for our nation, everyone would have known it, recognized it and applauded him for getting the job done.

This new-found confidence in the private sector is working. Friends, neighbors, family members and people everywhere are getting new higher-paying jobs instead of job rejection letters. Millions more of our fellow citizens of all ages and races are working today and providing for their families.

The national Democratic Party wants the public to believe that a sign of government policy success is how many people are on government assistance. They want more socialism which means more government control of your lives, not less.

We believe the reverse is true. The more people are independent and off of government assistance because they have a good job, the better it is for them personally and for the nation as a whole.

Think very carefully about yourself first and your personal economic interests, dreams and desires and those of your children and your friends when you vote this fall.

Do you really want to give the keys back to Congress to the same Democratic leaders who supported every failed economic policy put forth by President Barack Obama?

In 1999, Gallup found a vast majority of Americans thought President Bill Clinton was personally immoral but they liked the fact they personally benefited from the results of the economy that happened under his watch.

You may personally dislike President Trump and the way he does things. But be wary of electing people to Congress and legislatures who want to reverse everything that has worked so far under his term.