Think Everything Has Been Solved Under President Obama? 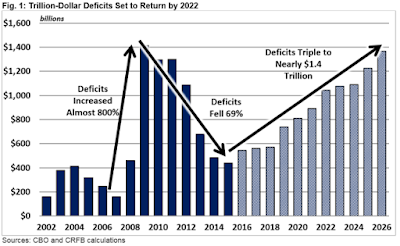 Most recent forecasts and projections by the Congressional Budget Office (CBO) show that federal spending jumped in 2016 just as tax payments from small business and individuals dropped due to the weak economy.

The scary thing about these projections is that they still project a relatively 'calm' rate of interest on the national debt for the next 10 years, increasing from near zero today to 3%-4% by 2026. If interest rates spike at any time during that period, these projected deficits will increase even faster.

There is not much more we can add to this CBO report (which we urge you to download and read as you hunker down watching Hurricane Matthew this weekend; the summary is only 9 pages) that we haven't already written about before.

For the past 8 years, we have been pointing out the critical importance of having our President and elected US Senators and Representatives come together on some sort of 'Grand Bargain' whereby the major entitlement programs would be thoroughly examined, evaluated and then reformed, especially in the health care programs, Medicare, Medicaid and the military and VA health programs; worthless and wasteful programs in domestic discretionary and defense budgets would be eliminated and, if absolutely necessary to gain a majority to get it passed in Congress, some small tax hikes somewhere to garner the necessary votes for passage and ultimate signature signing ceremony in the Rose Garden by President Obama.

We have put it this way to reluctant conservatives opposed to any tax hikes ever under any circumstance:

'If you could get $10 trillion in spending reductions from the baseline over the next 10 years GUARANTEED and in place BEFORE any taxes take effect, would you agree to a $1/head tax hike on everyone to complete the Grand Bargain'?

Had such a bargain been completed in 2009 instead of President Obama and the Democrats, who had 100% control of the US Senate and Congress at the time, steamrolling the Republican minority in Congress to pass Obamacare which is now coming apart at the seams like a cheap suit (Even Bill Clinton calls it 'The Craziest Thing Ever!'), our national debt would be closer to $12 trillion or maybe just $13 trillion today instead of $20 trillion heading to $21 trillion.

The greatest threat to our future going forward is not higher taxes, although they would tend to mitigate accelerated economic growth. We have proven that somehow we can absorb, or avoid, the higher taxes and regulations of Obamacare over the past 8 years and not completely fall apart as an economy.

The greatest threat to our future going forward is not getting firm control on our exploding federal debt. Anyone who has been in Congress or the US Senate or The White House for the past 8 years and not voted for a legislative package that would have limited spending first and possibly agreed to some small tax increase in return to curb these deficits has, in essence and in results, 'VOTED' FOR HIGHER NATIONAL DEBT!

There is no other way around it. Anyone who was not part of a solution has been part of the problem no matter how loud they cry that they 'Did NOT Vote for Higher Taxes!' or 'Did NOT cut this-or-that program!'

By their own decision to default to inaction, they have willfully and thereby almost intentionally 'voted' to increase the national debt on everyone, especially our sons and daughters and grandsons and granddaughters and their progeny for possibly the next century to come.

Great Britain just made the last payment to the United States recently for debt they incurred during World War ONE which ended close to 100 years ago.So it has happened before.

Everyone who has been elected to go to Washington over the past 8 years had the power to not add $10 trillion to the national debt but they failed in their responsibility and duty as our elected representatives, Senators and President.

No manner of excuses or finger-pointing or name-blaming can exonerate each of them from such a judgment of history. They were there; they didn't do anything about it; others who follow will have to clean it up and clean it up fast or else we will all suffer the consequences for their inaction, carelessness and in many ways, sheer stupidity.

One thing we can all agree on is that there is some definite finite point where any economy on the face of this earth can incur 'too much debt'.

As Alan Greenspan used to say when testifying about the federal budget and national debt before the House Budget Committee or the Joint Economic Committee (where he and 1 Federal Reserve aide were often the only 2 people at the hearing other than the Chairman and his staff and the congressman I worked for and myself so it was very easy to hear and understand what he was saying):


'I don't know where the line is that crosses us over from 'manageable' amounts of national debt to 'unsustainable' levels of federal debt. But what I can tell you is that if we do recognize it and start to try to do something about it only then, it will be too late at that point in time'.

Why take that chance?

You are going to get your chance to vote for people to go to Washington to fix this crucial public policy problem in about 1 month.