The Lost Obama Years: Want 8 More Years Of This? 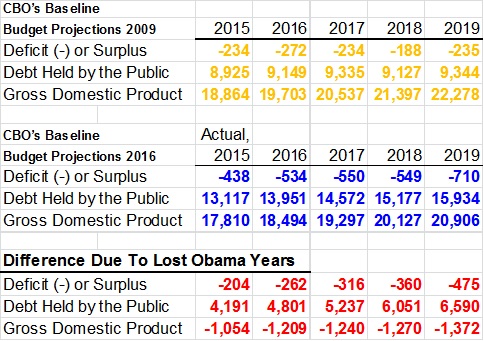 We generally prefer to talk about public policy issues with facts and references to original data sources since we believe that is truly the only way to be honest with each other and then try to find the best solutions for us all as a nation.


There has been a lot of pirouetting, back-flipping and spinning coming out of the Obama White House and his economic advisors lately about just 'how great!' the American economy is today.

Hillary Clinton and her team, many of whom are from the Obama worldview of how to run government and the economy, are parroting the same lines as always:
Well, things just are not all that great economically. It hasn't for the last 8 years.

We just got back from a trip through eastern North Carolina. In small town after small town, all we saw was boarded-up businesses, deteriorating homes and empty streets.

One town was so depressing and dusty that one could have sworn it was a ghost town from the Old West.


The question we will put to you, the jury representing the American people today, is this:

'Do you really want 8 more years of the 'Lost Obama Years' as we can now honestly call it?'

Remember, at the beginning of 2009, the financial crash had already started and the economic and financial analysts were busy downgrading their forecasts for the American economy. Much of that was baked into their forecasts in January, 2009 so the slamming impact of the Crash of 2008 was already available to them.

What has basically happened since President Obama took office in 2009 is threefold:
There was a lot of euphoria when the Bureau of Labor Statistics released data recently that pronounced '255,000 new jobs were created in July, 2016!'

What most media analysts failed to tell you was that anywhere between 100,000 to 150,000 of those 'new' jobs were just part-time jobs, a disturbing trend that started in 2009 as a result of the recession and as a response to mandatory compliance with Obamacare that has failed to dissipate even 8 years later.

Here's our take on all the economic numbers put out by the Obama Administration and the news media:

'If these sorry economic numbers had been produced under President George Bush 43 or any other Republican President, you would have thought there was blood in the water and sharks were splashing all about'

Just to repeat an old refrain:
We can't think of one economic boom in modern American history that was preceded by a massive increase in the Big 3 of economic disincentives imposed upon the economy by the President or Congress in charge at the time:

There was hardly any economic recovery during the entire 11-year period of massive federal spending after the Great Depression started . When it did look like the economy was about to break out of its long slump in 1936, another major recession occurred that drove unemployment back up to 19.2% up from what the FDR Administration officials were then touting as 'major progress', 14.3%.

The economic malaise under FDR lasted 9 years from 1933 until the US entered World War II in 1942. The massive onslaught of federal spending did not solve the economic problems faced by our parents, grandparents and great-grandparents; many economic historians say his policies prolonged it.

Unemployment averaged 18% during Roosevelt’s first two terms in the White House. Over the course of those two terms, U.S. industrial production and national income fell by 1/3, not expanded. Despite billions of taxpayer dollars being spent to do the opposite.

We are about to end our 8th year of sub-par, near about negligible economic growth under President Obama.  His top-down-from-Washington heavy-handed, high tax and non-effective federal stimulus government spending approach is now proven not to work. At all.

If you look closely at every economic boom, including the ones started under Democratic Presidents John Kennedy and Bill Clinton, they were triggered by the passage of a series of taxes cuts coupled with pledges and promises to reduce federal regulation and hamstringing of American business and hold the line on federal spending and be fiscally mature adults about everything during their terms.

In other words, the successful Presidents gave American business, both big and small, the most important things they can have when it comes to expanding their business and hiring more people:

More Freedom and Confidence In the Future. President Obama did not succeed at doing either and Hillary Clinton is promising to continue his economic and fiscal policies and in many ways, expand them considerably.

JFK defended his tax cuts by saying something to the effect of business being a friend of people who like to spend more money on federal programs because 'without their taxes, we won't be able to spend it on programs we want to spend it on'

At least he was pragmatically honest about it.

If you think that everything is going great, and you think the grow-government-first approach is the way to create tens of millions of new full-time jobs over the next 8 years, then Hillary Clinton definitely is the person you should vote for as President in November.

There is almost a 100% chance she will follow the FDR/Obama 'Heavy Hand of Government Model'.

Not the 'Allow The American Economy Freedom To Grow Model' that Ronald Reagan employed as did President Bill Clinton once Congress came under Republican control in 1995 and he worked with them to balance the only 4 budgets we have seen in our lifetimes.

charts from CBO long-term projections, the first from Jan 2009 and the second from summer 2016 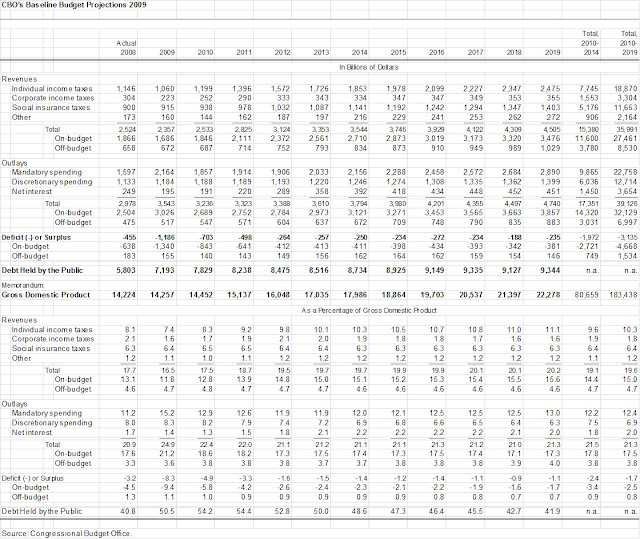 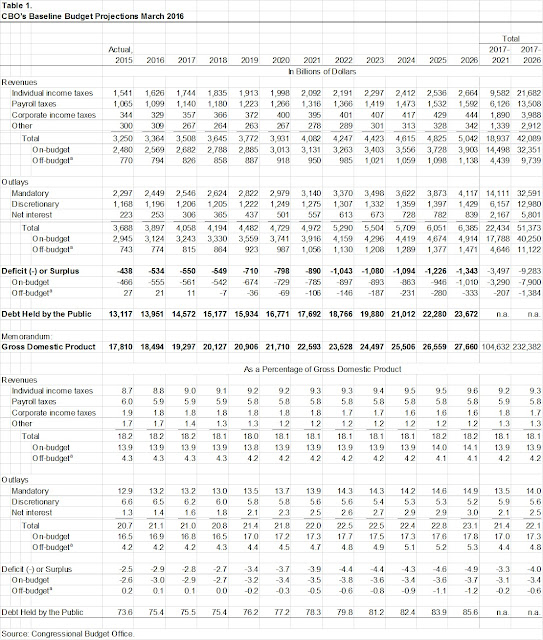