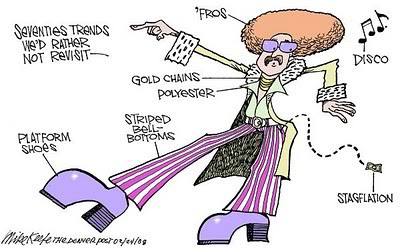 Unless you came of age during the late 70s/early 80s, this term will mean absolutely nothing to you.

It was a term coined by British Conservative politician, Iain Macleod, in 1965 who later became chancellor of the exchequer in England in 1970.

Generally, 'stagflation' was used to describe a horrible economic mess of a condition where bone-headed and wrong-minded government fiscal and monetary policies combined to produce high inflation, stagnant economic growth and high unemployment.

It was used to hammer President Jimmy Carter in the 1980 presidential campaign by Ronald Reagan to great effect.

Because President Carter's almost completely inept leadership on fiscal and monetary policy during his only term in office led to outrageous rates of inflation, up to 12% by end of his term; 21% interest rates; unemployment rates that hit 10% less than a year after he left office on January 20, 1981 and a general sense of 'wrong direction' for the country such that even he had to admit it was a 'malaise' in a national address that was almost too hard to even watch.

Know what the 'dissatisfied with the way things are going' poll numbers under President Carter' were as recorded by Gallup in 1980?

Know what they are today under President Barack Obama?

That looks like the American people are about as 'unhappy' with the results they have gotten under President Obama's leadership as they were under President Jimmy Carter, doesn't it?

Look at those economic indicator numbers. They also led to the 'misery index' which Ronald Reagan used to ask people: 'Are you better off than you were four years ago?' to great effect and great success as he walloped Carter in the largest electoral wipeout of an incumbent President in American history.

What we have today after 8 years of President Obama's leadership (sic) and policies in America is this:

Seriously, think about it. We don't have anything even remotely close to an economic boom going on in America today.

Oddly enough, if we did have massive job creation and hiring going on, you would see interest rates and inflation start to drift up due to higher demand for money and the material and services that almost always accompany any even modest economic recovery.

It has now been 7.5 years under the leadership of President Obama who can not possibly still be blaming George W. Bush 43 for this lackluster economy, can he? (don't answer that)

We have somehow 'successfully' (sic) managed to rein in our humongous national economy, the most diverse and productive economy the world has ever seen, to slow to a virtual crawl after 8 years of increased taxes and regulations emanating from Washington federal bureaucracies like millions of fire ants spoiling a picnic.

Since Barack Obama took office, and before he leaves on January 20, 2017, a record number of federal regulations will be issued by his Administration, did you know that? He will have presided over the record number of close to 640,000 pages as published in the Federal Register spewing bureaucratic verbiage to install over 24,000 new final rules and regulations to tell our nation's businesses mostly what they can and can not do.

FDR in his heyday of virtually nationalizing everything under his New Deal for 12 years probably didn't exceed those mind-numbing generation of promulgated regs.

People who like more government write more laws and more regulations. It just goes together like a hand-in-a-glove.

As a result of the wet blanket of these mind-numbing new regs when coupled with all the new taxes and deficit-spending under President Obama, we are now at the virtual stage of an economic standstill if there ever was one.

1.76% average GDP growth for 8 long years. When we worked on Capitol Hill, any projection of growth rates below 3% per year were considered 'decimal dust' and 'ridiculous'.

'How could the greatest economic engine the world has ever known be kept BELOW 3%?' was the sentiment.

Well, we did it. Yippee. Congratulations.

In otherwise 'normal' economic times, inflation at near-zero levels would be terrific for business, economic expansion and massive job creation.

In otherwise 'normal' economic times, unemployment rates at below 5% levels would be terrific for business and economic expansion since, obviously, massive job creation had presumably occurred.

In otherwise 'normal' economic times, unemployed people who wanted to work and make a living and provide for their family would be sprinting towards the job market, not leaving it in droves, as in many months under President Obama, when more people left the job market than the number of people who found jobs,

We have 'none' of that today, do we? Ask around. Ask your friends and families if they feel a sense of exuberance about their economic prospects and financial situation today.

Ask them if they are finding job opportunities jumping out at them from every source they meet.

That is what a 'normal' economic expansion would look and feel like. Older folks who experienced such expansions in the 1980s and mid-to-late 1990s can tell you that is exactly what it looked and felt like when they experienced it.

They don't see it happening right now. They have not seen it happen for the past 7.5 years.

So ask yourself this serious question in the privacy of your own home:
Any continuation of the same economic policies for the next 8 years will most likely yield the same desultory results.

Is that what you really want for the next 8 years?