'Let's Assume The Next Congress Knows Absolutely Nothing...'

'...but I repeat myself' as Mark Twain might have said.

We have tons of problems we want the next president and the next Congress to fix. The economy. The budget deficit. The national debt. Jobs. Racial discord. NFL replay.

(Why not? Just drop instant replay and play the game straight-up if they are not going to reverse bad calls like that first pass by the Panthers in the Super Bowl)

Let's assume that the next President and every Congressman and US Senator elected this fall knows absolutely nothing at all about microeconomics, macroeconomics, federal budgeting or tax policy-making process, business, investments, monetary policy or international trade and finance.

It isn't hard if you try.

What could they possibly do that would help get us out of this mess we find ourselves in now 8 years after the Crash of 2008?

As surprising as it may seem, the next President and the next Congress and US Senate really do not have to do a whole lot in order to get a massive result in terms of job creation, deficit-reduction and a general return to economic prosperity and economic growth.


Nope. We don't need a super-dupercalifragilisticexpialidocious omnibus COBRA/TEFRA/ALPHA tax and budget bill like so many politicians want to concoct to show they 'are really doing something about the economy!'

In fact, we would like to suggest that the first bill coming out of the 115th Congress in 2017 be called the KISS Bill...'Keep It Simple Stupid!'

So maybe electing politicians who don't know anything about all the high finance part of federal budgeting and tax policy might finally be an advantage instead of a hindrance.

We think the next Congress and President can and should do the following things:
Period.

How do you do that, you say?

You do it by not threatening to regulate and tax everything that walks, moves or burns, as the Chairman of the House Energy and Commerce used to explain his expansive jurisdiction.

You do it by repealing, reversing or rescinding almost all of President Obama's executive orders and return to 'regular order' meaning 'The President proposes and Congress disposes'. That has worked pretty well for most of our history; it will work again if we have a President who understands the priority our Founders placed on setting up the legislative system as Article I of the Constitution, not second behind the executive branch.

Once the next President and Congress are seen as being friendly to the economic realities of our free enterprise system, and business owners and investors and entrepreneurs get a whiff of a firm breeze blowing into their sails from behind versus a gale force wind blowing right into their faces every day, they will start investing more and hiring people and creating jobs and expanding more rapidly than we have seen under now 7 years of the failed Obama top-down economic policies.

The only thing that has 'trickled down' from the Obama years has been a stagnant economy where millions more people have left the workforce instead of joining it and finding great new jobs in an expanding economy.

'Trickle down economics' works both ways you know. Our economy either expands and grows depending on whether the country feels like someone who knows what they are doing are in charge, or it contracts or becomes crippled when they feel like those who are in elected leadership positions don't know what they are doing.

It is like day following night. Or vice versa.

The other reason why 'The KISS Solution' might be the best tack to take in January 2017 is that all we need is to exceed economic projections for economic growth and job creation by just a little to make a world of difference in our budget and fiscal picture and outlook.

We try to read these reports so you don't have to but here they are anyway: The Long-Term Budget Outlook 2016-2026 by CBO and publications from OMB in the White House that accompany the President's budget submission to Congress each year.

If you take a look at the appendices, tables, charts, graphs and analytical perspectives at the end of both publications, you can usually find some really interesting stuff that could help people in public office make better, more rational decisions.

If they would read them, that is.

In the two clips copied below (highlights in red), you will find some interesting discussion about various outcomes using sensitivity analysis which really means 'what would happen if this happens, or that happens, or another thing happens, all holding everything else the same'.

We want to know what would happen to our fiscal and financial house if, say, more people went back to work and started paying taxes on earned income again and left the welfare rolls or Medicaid and were able to provide for themselves and their families instead of relying on government to do it.

Just to show you the power of having a robust, expansive, job-creating economy versus the one that moves like a sloth we now have, consider this:

If we can just unleash the power of the American economy and allow it to grow in real GDP terms by little more than an extra 0.3% per year for the next 10 years, we will virtually eliminate federal budget deficits with no tax hikes, no tax cuts, no spending cuts and no spending hikes.

Imagine that. We could elect a new President and a new Congress and US Senate, ask them to do nothing other than restore confidence in the private sector as noted above, and we could solve at least our fiscal problems in 10 years.

After all, our elected officials in Washington have been pretty good at getting 'nothing' done for the past 15 years on the big issues that face us: immigration, economy, jobs, budget deficits and the national debt. Why not tap into that 'talent' (sic) and just tell them to do 'nothing' for just a little while longer?

If we could fix our entitlement growth especially in Medicare and Medicaid, revamp or repeal Obamacare and replace it with something more in tune with what works in the American health care system (see numerous previous posts) and cashier this archaic IRS system and move to a more manageable consumption-based tax, for one example, we might grow at 10% per year and see jobs erupting out of the economy like flowers in the springtime.

Wouldn't that be nice to see after all these years?

The rules of thumb described above can be used in combination to show the effect on the budget of alternative economic scenarios. Considering explicit alternative scenarios can also be useful in gauging some of the risks to the current budget projections. For example, the strength of the recovery over the next few years remains highly uncertain. Those possibilities are explored in the two alternative scenarios presented in this section and shown in Chart 2-3.

The first alternative scenario assumes that real GDP growth and unemployment beginning in 2013:Q4 follow the projections in the February 2014 Blue Chip forecast for the period through the end of 2015, and are extended through 2024 from the semi-annual October 2013 Blue Chip report. In this case, after 2013, the level of GDP remains lower than the Administration’s forecast throughout
the projection period. This alternative includes a smaller real recovery from the loss of output during the 2008-2009 recession. Growth returns to normal, but without a substantial catch-up to make up for previous output losses.

Many other scenarios are possible, of course, but the point is that the most important influences on the budget projections beyond the next year or two are the rate at which GDP and employment recover from the recession. 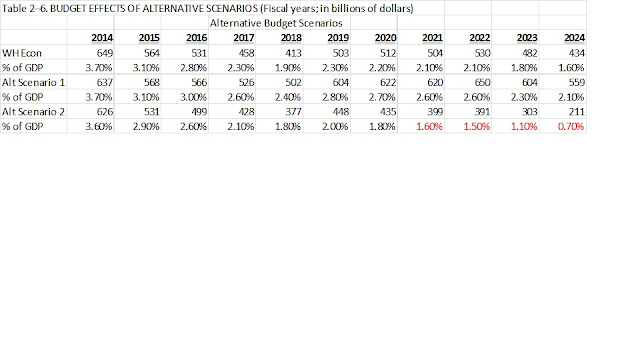