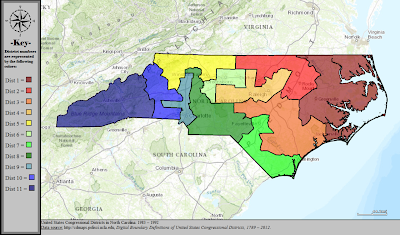 My initial question was this:

'In which decade? And in which century??'

North Carolina has long been close to a 50/50 voting state when it comes to presidential, senate and gubernatorial elections dating back to 1980.

However, due to expert gerrymandering surgically performed on state legislative and congressional districts since Reconstruction after the Civil War, North Carolina Democrats masterfully maintained a stranglehold on the congressional delegation in Washington, DC and the General Assembly in Raleigh until 2010.

140 years after the Carpetbagging Republicans controlled the state after the Civil War and then were run out of the state on a railroad long about 1870 or so.

The North Carolina congressional delegation had just 2 Republican congressman (out of 11) in 1980, Jim Broyhill and Jim Martin plus Senator Jesse Helms.

The NCGOP had an average of 18 state representatives out of a total of 120 in the General Assembly during the 1970's heading into the 1980 elections. That is 15% for those of you scoring at home.

The NCGOP had an average of 7 state senators out of a total of 50 during the decade of the '70s. 14% in the state senate.

Looks like someone was doing a pretty darn good job of making sure the Republicans never got a firm foothold in North Carolina politics for a long, long, long time, yes?

Now there is a lot of hand-wringing and gnashing of teeth that with the Republicans now firmly in control of the North Carolina congressional delegation, the General Assembly and the Governor's Mansion, the gerrymandering system is 'unfair and needs to be done away with!'

Didn't seem to be the case for the previous 140 years under almost 100% continuous Democrat control of every level of government power in the Old North State.

With that history in mind, I felt compelled to write this short note to my Democrat friends, which, surprisingly, there are more than just a few (I think):

In 1984, I ran for Congress in the 2nd Congressional District of North Carolina.

The district was 'only' 91% registered Democrats. 42% of the district were registered African-Americans who were not counted as 'solid' GOP voters as far as I can recall.

9% of the registered voters in the entire congressional district of close to 550,000 citizens were officially registered as 'Republican' in 1984.

Make it 10% when you add in the dead Republican voters down in the eastern end of the district.

I only have one question today:

'Where was the outrage about gerrymandered districts back then in 1984????'

I seriously don't recall one single Democratic activist, candidate or incumbent anywhere saying that the redistricting that favored the Democrats in North Carolina for close to 110 years then (140 years as of 2010!) was 'unfair, cruel and wrong' in any way.

And I am not sure I can recall any Democrats who came to my defense or the defense of any Republican in the 1980, 1990 or 2000 redistricting process and argued for fair and balanced 50/50 districts at the state or federal levels...or in any of the other decennial census re-districtings dating back to 1870 or so.

So before we get too carried away with the tiny violins crying about how bad the mean old Republicans are nowadays, take a step back and look in the rear view mirror first.

It is not a pretty sight.'