'Where Are The Thomas Jeffersons, James Madisons and Alexander Hamiltons of Today?' 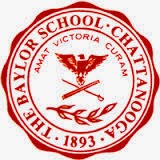 They are all around us.

They are not running for public office. Yet.

We just returned from an exciting day-long seminar series at Baylor School in Chattanooga, Tennessee where we met with 19 young scholars and campus leaders through The Institute for the Public Trust we are running to find and train new leaders to run for office.

If you want to regain your hope for the future of America, spend any time with any young scholar or campus leader you can find and sit and listen to them for any length of time.

America's best times are ahead of us. Not behind us. These young leaders convince us of that.

We asked Stewart Harris of the Appalachian Law School in Grundy, Virginia and the Madison Center on the Constitution at Montpelier to come to Baylor to talk about why the Founding Fathers were such great visionaries, leaders and revolutionaries not only relative to their times but to all times in all nations since then.

There were many reasons why they succeeded at establishing our democratic republican self-government when so many had failed over the entire previous history of mankind. Not the least of which was their high level of education; their backgrounds, their families and perhaps sheer Fate, Destiny or Pure Statistical Luck of the Draw that so many of them lived at the same time in a relatively small geographic area.

It struck us as we were listening to Stewart speak to these young Baylor Leaders of Tomorrow that maybe we put our Founders on too much of a pedestal when it comes to their 'knowledge' of things in this world.

Not their native 'intelligence'. Clearly, if IQ tests existed back then, the collective IQs of Benjamin Franklin, Thomas Jefferson, James Madison, Alexander Hamilton and any of the other dozens of signers of the Declaration and/or who attended and perhaps signed the US Constitution (not all the attendees did so) might surpass the collective IQs of 100 US Senators, 435 Representatives and 1 US President now in office today.

That might not be too much of a stretch when you really think about it.

When it comes to actual 'knowledge' of the world, consider these musings:

We could go on all day about what even the average citizen in America 'knows' today that far exceeds the database of knowledge that was available to our Founders in 18th century America. Or Europe for that matter since many of them spent extensive time in France and England studying and working before returning to start the American Republic.

Mr. Harris went on to identify several other characteristics of our Founding Fathers to set them apart as great leaders, not all of which would be considered 'great' in anyone's eyes today or maybe even then.

Alexander Hamilton could be a self-important jerk on occasion with id/ego problems that were hard to believe. His heightened sense of moral (at least in public) rectitude lead him to accept a duel with then-sitting Vice President of the United States of America (!) Aaron Burr when a nice apology and quiet words of conciliation would have allowed Mr. Hamilton to live longer than his short 49 years of life here on earth.

Can you just imagine the uproar if Vice President Joe Biden challenged former Treasury Secretary Hank Paulson to even a mud-wrestling match on the West Front of the Capitol? (Who wouldn't pay big money to see that one?)

The point of this observation is that we do not suffer from a lack of 'knowledge' in America today.

We suffer from a lack of courageous, convicted leadership on the part of our very best citizens to run for public office.

The Founding Fathers and Geniuses such as Franklin and Jefferson would have thought they had died and gone to heaven if they had these basic tools of American life and business today in their hands and at their disposal: a laptop; an IPhone, an IPad and a working wifi internet connection.

And people use them for games and for posting beef stew recipes today. Good grief!

Look at what the Founders did with just quill pens and rudimentary printing presses! It took weeks if not months for news to travel overseas or up and down the East Coast!

In many ways, we think it is fair to say that we 21st century Americans are 'smarter' than even Thomas Jefferson and Benjamin Franklin, two of the smartest Americans or human beings who have ever walked this planet.

We may not be as natively 'intelligent' or even curious as those gentlemen were. But we sure do know a lot more about everything than they could have ever dreamed in their wildest imagination.

So what is the problem today?

Our very best citizens do not run for public office. Jefferson, Madison, Hamilton and Franklin did.

Plain and simple. It isn't rocket science to figure that out.

Imagine a US Senate today without Majority Leader Harry Reid or Minority Leader Mitch McConnell or any of the other 98 Senators who just don't get much of anything done of any consequence any more and haven't for the past 5 years.

Instead, imagine that the most successful or recognizable person in each of the 50 states allowed themselves to be considered for election to to the highest elective office in the nation, The U.S. Senate.

How about a Senator Bill Gates from the state of Washington? A US Senator Warren Buffett from Nebraska. Senator Oprah Winfrey from Illinois. Senator Michael Jordan from North Carolina. Senator Francis Collins of Maryland.

How about any of the bleating talking heads on talk radio or cable would even try to run for public office? Like him or hate him but you got to hand it to US Senator Al Franken of Minnesota who was a SNL regular before turning into a biting political commentator: He walked his own talk and ran for the US Senate rather than bleat and bray about it on the street corner where not many people really care anyway...and he won in Obama's landslide of 2008.

That is the level of distinction and achievement we saw from our Original Founders. They made their way in something other than politics before running for public office where they could take those talents and experiences and bring them to the common table of political discourse to help solve the big and truly intimidating problems we face as a nation.

Think it might be nice to have more accomplished accountants, financial managers and CEOs running the federal budget? Doubt we would have a $17 trillion debt going on $20 trillion before President Obama leaves office in the next 2.5 years.

Think it might be nice to have more accomplished scientists such as Francis Collins who heads the NIH? There are people now serving in Congress and state legislatures who couldn't tell you a molecule from a mole hill or a beauty mole.

Think it might be nice to have some more distinguished military leaders such as retired generals or admirals serving in the US Senate or Congress? They might know what to do about ISIS more than the 80% of the current sitting US Senate and Congress who never served in any military service. Including President Obama who never wore the uniform of our armed services either.

You get our drift here?

We know for a fact that we have the next Thomas Jefferson, James Madison or Alexander Hamilton now living in our midst.  We have many living in the state of North Carolina alone. We know because we have seen them, met them and trained them to run for public office.

We hope they do so. Sooner than later. We see no reason why every Baylor student now in our class series over this next year, or any of our over 500 graduates now, will not run for some elective office from county commission to city council to school board to state legislature to Congress and serve at least 1 term at any level.

Who knows? Maybe one will run for the White House one day as well.