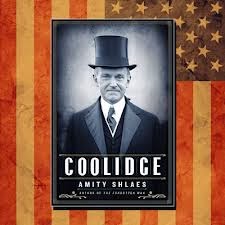 And then after 8 years as Vice President to President Reagan, President Bush actually took the necessary steps to implement the first critical spending cut part of those same 'voo-doo economics' when he elevated to the White House in 1989 as the first sitting incumbent VP to do so in over 150 years.

What President Reagan and then President Bush 41 were trying to emulate was the spectacular record of President Calvin Coolidge from 1923-1929 who implemented a policy of spending cuts plus tax cuts that led to some of the most solid and spectacular economic growth and job creation this nation had ever seen at the time.

Instead of wanting the next Republican President to be 'Just Like Reagan', conservatives would be well-advised to be looking for the 'Next Calvin Coolidge'.

His policies worked. We need his policies to come back to reinvigorate the US economy and bring millions of people back to work again.

President Coolidge and his Treasury Secretary Andrew Mellon did a pretty savvy thing with Secretary Mellon's 'scientific taxation' as they called it at the time. It was nothing more than 'supply-side economics' dot.1.0 version.

President Coolidge was somewhat of a flinty New England skinflint to begin with. Being frugal not only with his money but especially the money of the taxpayer of the state he governed as Governor, Massachusetts but then the United State, he brought new deep meaning to the word 'parsimonious'.

President Coolidge met with his budget director in person every single week. Compare that priority with the priority of other Presidents; depending on which President you choose, you find that others met with the defense secretary every week for lunch or their tax reform advisors. President Obama apparently has met a lot with people from the IRS although the White House is not very forthcoming with the nature of each of those talks, although we do know that Lois Lerner is somehow involved with them.

Coolidge's predisposition to being frugal with the taxpayer's dollar as if it was his own let him to cut the ever-loving heck out of federal spending first, so much so that they even sold a barrel of spoiled seal shoulder blubber/meat for $20 for crab bait instead of throwing it away as waste. Coolidge issued 1 pencil per federal employee and wouldn't replace it unless it was worn to a nub and the people could produce it as evidence before trade-in.

And THEN they started cutting taxes because the surplus was building annually and it became a self-fulfilling prophecy: spending cuts produced surplus; surplus produced tax cuts, tax cuts produced more job growth and tax revenues from those jobs in income tax and excise taxes...and then the cycle started again.

For about 4 years straight beginning in 1925, he pulled that magic off. There really is no 'magic' to it. It is basic fundamental economics and common-sense federal budgeting. Something we have not been close to since the glorious 4 years under former President Bill Clinton when he let his Chief of Staff Erskine Bowles negotiate a balanced budget deal with the Republican leaders in Congress and the Senate in 1996-1997.

President Bush 41 got the ball rolling in 1990 when he advocated, pushed for and then signed the Budget Act of 1990 that instituted the maligned but very effective PAYGO budget mechanism. For about 11 years, PAYGO forced every Congressman and US Senator who wanted to expand federal spending to propose the taxes, or the spending cuts elsewhere, to pay for it. Conversely, anyone who wanted to cut taxes had to propose the spending cuts to pay for it or specific tax hikes elsewhere to make it 'budget-neutral'.

As in: 'not increase the budget deficit over what it was estimated to be based on CBO's projected baseline forecasts each year'. It. Worked. Marvelously.

No new entitlement such as the Medicare Part D prescription benefit could have been passed in 2003 without specific payroll tax hikes or entitlement cuts in other programs to pay for it. Bush 41's son, Bush 43, conveniently did away with PAYGO in 2001-2002 to do what, students?

Pass the Bush Tax Cuts without the attendant political 'pain and suffering' of finding spending cuts like Calvin Coolidge would have demanded before passing any tax cut! The Bush 43 Administration was as adverse to spending cuts as any we have seen over the past 30 years and he had a compliant, and now apologetic GOP who controlled both houses of Congress that went along with his misguided spending policies.

Obamacare? The ACA would have never passed had PAYGO been in force in 2009-2010. You think any Democrat in Congress or the Senate would have stood up and said this in public?


'The ACA is going to cost at least $1 trillion, perhaps $2-3 trillion when all is said and done. Therefore, on the behalf of President Barack Obama and the National Democratic Party, I am proposing that payroll taxes be increased by 50% in each of the next 4 years in succession to pay for it'


The Tea Party Revolution in 2010 would have picked up 163 seats instead of just 63. The Democrat Party today would be as relevant as 'tits on a bull' as Senator Alan Simpson was fond of saying.

Four years of budget surplus allowed close to $500 billion of national debt to be retired during Clinton's second term. Clinton left office with about $3.3 trillion in debt held by the general public (as opposed to the somewhat fictitious 'gross debt' which includes intragovernmental transfers).

Today the debt under Obama is about $14 trillion in debt held by the general public and it is heading to about $18 trillion when he leaves office.

Sheer brilliance, persistence, and genius in federal budgeting and fiscal management in President Calvin Coolidge showed what could be done in the White House by someone who was serious about protecting America's financial and fiscal health.

Don't you agree we need the 'next Calvin Coolidge' in the White House and not the next (fill in the blank)?

(from 'Coolidge' by Amity Schlaes. Pick it up and read it. It is not on the order of the gripping and arresting writer style of Ron Chernow, author of 'Hamilton' and 'Washington' but it is chock full of examples and exhaustive historical data if you are interested in that sort of thing)