The Congressional Budget Office (CBO) has been causing a lot of waves lately.

First, CBO threw a wrench in the rollout of Obamacare by saying that despite everyone's great intentions, 31 million people will still be uninsured by 2023 despite spending anywhere from $1.2 trillion to $3+ billion in deficit-financed, debt-increasing subsidies and other costs related to full implementation of the ACA.

Oh, yeah...CBO also says that Obamacare is causing a net reduction in full-time equivalent workers of close to 2.5 million people as well.

With this report just published, CBO has now stuck its finger in the eye of the Obama Administration that wants to raise the minimum wage to $10.10 across all of America after signing an executive order that raises the federal minimum wage paid to civil servants to that level.

CBO pretty clearly says this about raising the minimum wage to $10.10/hour right out of the chute on the first page:


'Once fully implemented in the second half of 2016, the $10.10 option would reduce total employment by about 500,000 workers, or 0.3 percent, CBO projects. As with any such estimates,however, the actual losses could be smaller or larger; in CBO’s assessment, there is about a two-thirds chance that the effect would be in the range between a very slight reduction in employment and a reduction in employment of 1.0 million workers'

(Talk about covering your bets on all sides of the wager! But the chances are pretty high, according to CBO, that a significant number of jobs will be lost as a result of the higher minimum wage)

In other words, raising the cost of doing business in any fashion, whether it is in the form of regulations, taxes, or forced higher input costs such as a higher minimum wage reduces the number of jobs available for the roughly 20 million un- and under-employed Americans we have in this country today.

One thing that gets lost whenever we talk about raising the minimum wage, an emotional issue to be sure, are some of the basic facts of the issue.  Fortunately, we had the chance to ask learned people in Washington who spend all their lives looking at one particular aspect of any economic problem such as the minimum wage in America what their research showed instead of having some talking head try to tell us what they think we should believe.

There are lots of things to consider but here are just a few of the ones we have wondered about over time.
These are all bottled up under the umbrella of 'fairness' but they are all very separate issues that seem to cry out for different solutions and proposals to be offered to address each one in kind.

Since we always think visuals work better than forcing people to dig through dense prose, especially on complex budget/economic matters, we thought we we would post a catchy chart for you below to take a look at before reading the full text at the blogsite 'Political Calculations'.

Obviously, the largest number of people who are affected by the minimum wage are aged 16-24. Over 2 million people in 2010 in this age group were being paid the minimum wage during the year.

Based on population distribution, that would mean a state such as North Carolina might have perhaps 7260 workers aged 45-49 making the minimum wage;  2730 people aged 60-64 make the minimum wage. 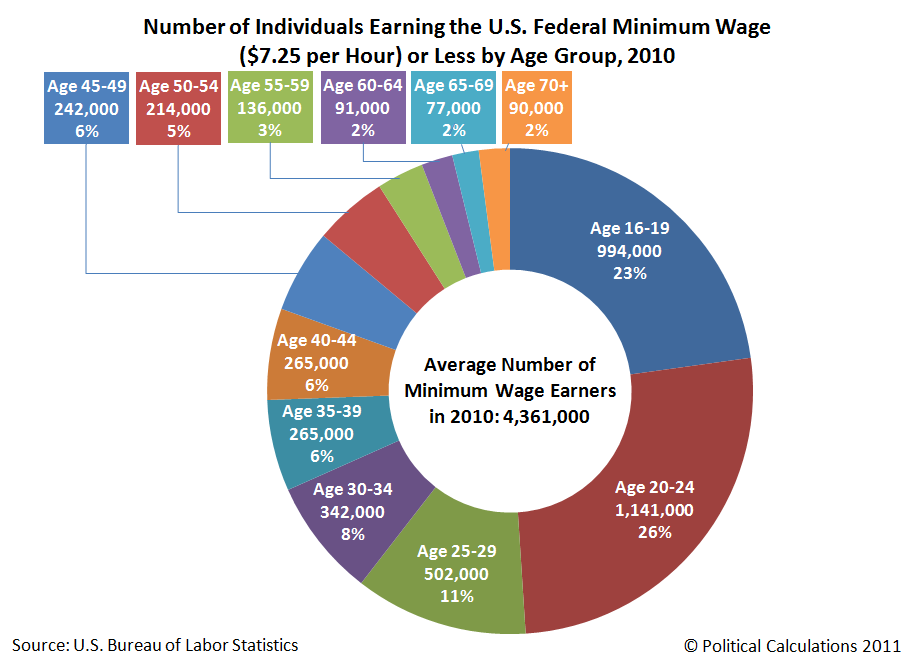 When we were young and inexperienced in most everything during high school and college, we were just glad to have a job of any kind in the summers. We flashed tar on the roofs of the American Tobacco warehouses in downtown Durham in the middle of August when it was 100 degrees in the shade and the humidity was about 95%...and it was not raining. We loaded empty bottle crates at the local Coca-Cola Bottling Company back when 'recycling' meant re-washing all of the glass bottles instead of dumping bazillions of PET plastic bottles into the trashcan. We worked in construction and somehow didn't cut off both hands and feet with circular saws or smash all fingers with 32-oz hammers.

We were lucky. We had a family that supported us and paid our bills. The money we made at minimum wage was spending money for us and millions of other young people as well.

It seems to us that these over 1 million young people working at the minimum wage should be treated differently than older people stuck at minimum wage jobs at the very least. One thing we have always been eager to see what would happen in actual operation would be for some state such as North Carolina to get a waiver for a period of several years to allow teenagers aged 16-19 to be paid a lower wage than the minimum wage, the so-called 'sub-minimum wage' from the past, and see if it leads to a massive increase in the number of jobs available to teenagers of all races and socio-economic backgrounds.

We think it would. Many business people tell us they would hire more teenagers in sort of an apprenticeship mode if they could hire them at less than the minimum wage and give them some very helpful real-world work experience.

If it does lead to substantial numbers of teenagers being gainfully employed in jobs where they can learn the value of showing up on time, being able to read and write clearly and communicate with others and working hard, then that would seem to have societal benefits that will last far into the future.

The second thing we were always interested in was this:

'How many people start at the minimum wage and stay at that level for their entire working lives?'

From a somewhat more dense report, take a look at this Bureau of Labor Statistics report: 'Do Some Workers Have Minimum Wage Careers'?

Two conclusions from their study are as follows:

'They found that 63 percent of the minimum-wage workers in their sample were employed at higher-than-minimum wage jobs 1 year later. Also, Bradley R. Schiller found that “only 15 percent of the 1980 entrants still had any (minimum wage) experience after three years, “which suggests that long-term minimum wage employment is rare.

There still remains the very real problem of older adults staying at or near the minimum wage for most of their working careers. The BLS report states that most people move onwards and upwards from the minimum wage after an entry-level job that gets them in the workforce but there is 'the non-trivial fraction of workers who spend substantial portions of their post-school career on minimum or at near-minimum wage jobs....We find that workers with such minimum wage careers are drawn from demographic groups with generally low wages; women, minorities and the less-educated.'

If we continue to have 30-50% of all students who enter the 8th-grade drop out before they graduate from high school, that is going to be a very difficult cycle to break. Education, or lack thereof, almost always seems to be part of the equation when it comes to poverty in America

One final observation that we have always found intriguing is this: 'If you want to pay anyone more than the minimum wage, you are more than free to do so at your place of business or in your home.

Nothing is stopping you from doing so, you know. If you want to earn less profit or have less money in your pocket vis-a-vis those mean people who don't want to pay a higher minimum wage, that is entirely your right and you have the freedom to do so each and every day of the week, month and year.

You may even attract better workers from your competitors or neighbors who fail to match your $15/hour wage pay to your lower-skilled worker. People should be falling over themselves to get to your place of business or home at a 50% premium in pay, shouldn't they?

We don't have all the answers or else we would run for the White House and tell everyone our great secret solution. However, we do think that the debate over the minimum wage is far more nuanced than advocates and antagonists want you to believe and that we need more clever and nuanced solutions to address the problem.

Having some of the facts at hand might help everyone debate the thorny issue of raising the minimum wage and other issues better. We think. It is such a novel concept, yes?