'Imagine There's No Trust Fund...It's Easy if You Try' 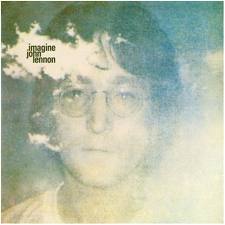 (with all due apologies to John Lennon and his song, 'Imagine')

We are constantly reminded of just how great of a job FDR's advisors did in the Great Depression 'selling' the American people on the whole notion of Social Security being some form of 'insurance' or 'pension' plan.

Which is it: 'Insurance' or 'Retirement'? Or both? Who the heck really knows nowadays almost 80 years later?

People always balk at the notion of 'cutting' Social Security, or Medicare for that matter, since they insist they 'have paid into the system all my life and now I want to get MY money back out of it with interest!'

'It is MINE!' they always say. Always.

Well, we hate to be the ones to burst your bubble...but all that money you have paid into Social Security and Medicare over the course of your working lifetimes ain't 'there' anywhere in the federal government. It 'ain't yours' anymore than any dollar in tax you have paid to support the defense of our nation, the protection of our environment or sending space probes to the outer regions of the next solar system.

It ain't in a bank account. It ain't in a trust fund building interest somewhere. It ain't in a Baggie in someone's basement where it is totally 'safe' from any vagaries in the national economy or employment situation.

If you want to know where your money has gone that you paid into Social Security and Medicare, look no further than your parents and grandparents and their peer group. ALL of the money you paid each week or each month in FICA taxes went DIRECTLY into checks that were sent to them to pay for their retirement and medical needs during their golden years.

Your money, then, is flat simply GONE! Forget the so-called 'Social Security Trust Fund'. Forget the Medicare 'trust fund'. The money you have paid each month in FICA taxes is nowhere today because it was spent 10, 20, 30 years ago about 10 nanoseconds after it was received by the US Treasury in Washington, DC.

One way we have asked people to get a better handle on where their tax money has gone in terms of income versus payroll taxes is to do the following:


Push the reset button in your head and just think of every tax dollar you have paid over the years as being treated exactly the same once it is collected in Washington.

That's right. Your payroll tax, the general taxes you have paid for defense, transportation, education, the gas tax you have paid on every tank of gas you have purchased for your Denali...just erase your preconceived notions of any of those dollars as being treated special for any set purpose such as 'your' retirement or health care needs.

The 'accounting' for each dollar is different, that is true. There are accounts, sub-accounts, functions and subfunctions galore that purport to allocate the money you have paid in taxes into some form of recognizable logic which leads most Americans to think and believe strongly that their payroll taxes are treated with reverence completely separate from their income taxes paid that doesn't.

But the cash going to DC is not treated differently. It goes in the government bank account on day 1.On day 2, it is sent to some person, agency or defense contractor to perform some legislated duty as determined by a previous Congress and signed into law by a past President.

And to further complicate matters, 75% of the Medicare expenditures each year in Part B are NOT paid for by payroll taxes or premiums paid by seniors but rather from, guess where, class?

'General taxpayer revenue dollars'. Yup, from yours and my income taxes and what we can borrow from the Chinese (still) or make up out of thin air at the 'Ben Bernanke Prestidigitation Clinic' commonly known as the US Federal Reserve.

75% of the Medicare Part B program is NOT paid by participating seniors with their monthly premium. It is paid for by general taxes paid by non-seniors for the most part. So how in the world can everyone be so misled to believe that Medicare is 100% 'self-funded' by senior citizen Part B premiums in the first place?

It is because that is what everyone WANTS to believe. We all want to believe that we can get something for nothing, in essence, don't we?  That is the true 'American Dream', as misguided as it may be, isn't it? When politicians lie about it and offer to give 'something for nothing' to a critical voting base such as the 44 million senior citizens out there today, well, that just becomes part of the electoral landscape and very hard to dislodge from the public psyche, yes?

For a very long time, early retirees on Social Security got far more money out of SS than they ever put into the program. My dad paid a maximum of $40/year into SS in his first job out of college...and probably bitched and snorted about every dime of it being deducted from his paycheck. He paid $41 the next year and so on.

When he turned 65 in 1982, he started receiving Social Security. He probably received all of the money he put in during his first 3 years of retirement. The rest was pure serendipity, 'gravy' if you will, until he passed away.

All of the money in his Social Security checks came from payroll taxes paid by people working between 1982 and 1989. Not from a dedicated source of funds locked away in some government bank safely ensconced in the mountains for West Virginia for security purposes.

The point of all these mental gymnastics? The point is that once we all understand and accept the fact that there is not a fairyland where everyone's retirement and health insurance needs are being funded by each of our own individual payroll tax contribution, we can then talk about taking the practical steps necessary to convert to a defined contribution model for every young person today that will transition them to a new plan for the future.

That is the only fair thing to do while we also honor our obligations to current retirees and people who are soon-to-be retired.

Here's a graphic representation of where the money goes each year in the federal budget. If anyone can tell us how we can balance the budget without reforming Social Security, Medicare and Medicaid and moving towards a more defined contribution approach rather than the defined benefit method we have employed since 1935, then we will buy you the biggest steak we can possibly find anywhere on the planet.

You may die of high cholesterol and hardening of the arteries but you will have provided an enormous benefit to the rest of us before you meet your eternal reward, that is for sure. 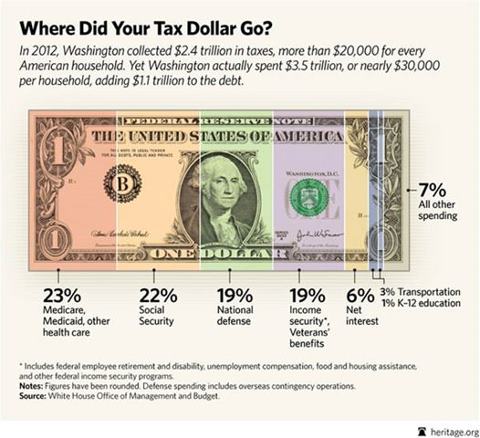