When we find things that are better-written, more clear and to the point than anything we can write on a subject, we try to reprint it for your edification.

'Last week House Republicans, under the leadership of Budget Committee Chairman Paul Ryan, unveiled their draft budget for the coming fiscal year. Senate Budget Committee Democrats also released their budget blueprint assembled by Chairman Patty Murray. Though the House has moved budget resolutions in recent years, this is the first time in four years that the Democrat-controlled Senate has attempted to move one. Accordingly only now is it possible to compare the two parties’ contrasting visions of fiscal policy management over the ensuing decade. This article highlights the distinguishing features of the two approaches.

For example, a budget resolution might envision a particular target for federal revenues that requires a change in tax law, but the passage of the resolution would not itself change the tax law. Tax legislation typically originates in the House Ways and Means Committee and is first considered in the Senate by its Finance Committee. The budget resolution, which is not signed by the president and lacks the force of law, can thus be thought of as a set of instructions that Congress issues to itself as to how other fiscally-significant legislation is to be crafted.

That said, budget resolutions do often reflect implicit policy choices. If a draft budget, for example, envisions a sharp reduction in the growth of a federal health spending category, it is customary for the budget materials to contain at least a rough description of how those savings could be achieved. Thus the numbers in a budget often reflect a set of assumed policy changes, even if the actual implementation of those changes would occur elsewhere in the legislative process.

Because the primary function of the budget is to frame general spending and revenue targets, this piece will focus on the overarching fiscal policy goals reflected in the Ryan and Murray frameworks. In presenting this information, I will rely upon the numbers published by the resolutions’ sponsors with the assistance of the Congressional Budget Office (CBO).

A note on baselines and deficit-reduction claims: In comparing alternative budget policies, what really matters are the absolute levels of taxes, spending, deficits, and debt under each. Too often advocates cite relatively meaningless quantifications of how their proposed budgets would change projected taxes and spending. The numbers behind such claims are often calculated relative to a baseline that is constructed primarily to support what the proposals’ backers want to claim. For example, now that most critical income tax law has been made permanent, there is little objective rationale for comparing revenue targets to anything other than CBO’s projections for current law. Nor is there justification for comparing a budget’s proposed spending levels to an inflated baseline in which it is assumed that current ongoing “sequestration” spending cuts are repealed. Press and public would do well to dismiss any such “deficit-reduction” numbers as the meaningless claims that they are.

Spending: The two budgets embody different visions for total future federal spending. Currently the federal government is spending 22.4% of the output of the American economy, a historically elevated share. Only in eight other years since 1946 has the federal government spent a higher percentage of the nation’s output than it is doing today, the exceptions being the first four years of the Obama Administration (2009-2012) and the height of President Reagan’s cold war defense buildup (1982, 1983, 1985 and 1986).

The Ryan budget aims to restore federal spending levels and growth patterns to post-WWII historical norms as a share of the economy, stabilizing total spending at about 19-20% of GDP in the out years. This is close to the historical average of 19.5% that prevailed from the end of World War II until President Obama’s inauguration. The Murray budget would continue the recent practice of elevated federal spending into the indefinite future, averaging about 22% of GDP in the out years and likely continuing to rise beyond the ten-year budget window.

Philosophically I am more sympathetic to the House Republican approach. In fairness, however, there is an oft-made argument for the alternative vision embraced by Senate Democrats – principally, that as Americans live longer lives they should receive federally-subsidized retirement and health benefits for a larger fraction of their lifetimes. If we accept that argument, however, there are only two possible consequences: either the federal government must impose higher tax burdens on our children and grandchildren, or it must spend relatively less on everything else. 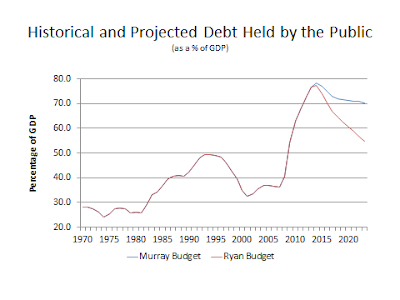 Debt: From 1957 through 2008, federal debt held by the public was never more than 50% of our total economic output. Debt began to surge in 2009 as a share of the economy due to various countercyclical policies of the federal government in response to the recession. This year the federal public debt is expected to exceed 76% of our economic output, the largest percentage since 1950 when our World War II debt was still being paid off. The Ryan budget would put these debt percentages on a downward course which, if sustained, would eventually return federal indebtedness to pre-Obama norms. The Murray budget seeks only to stabilize the growth of debt relative to the economy, thereby retaining recently elevated debt percentages as a permanent feature of our fiscal landscape. 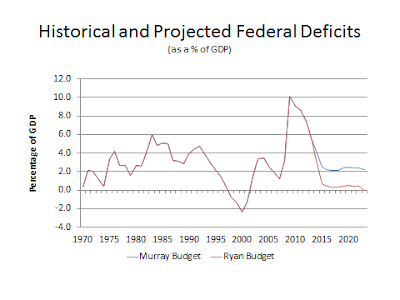 Deficits: The two budgets represent different attitudes toward fiscal balance. Annual federal deficits recently soared to modern highs starting in 2009. Since the end of World War II, the highest annual deficit years (relative to the size of the economy) have been 2009, 2010, 2011 and 2012. This embodies a sustained experiment in Keynesian stimulus without precedent in American history. The Ryan budget would take a different course, aiming for annual balance within ten years and enabling our economy to grow faster than our debt. The Murray budget would seek to reduce annual deficits to historical norms but would not meaningfully reverse the recent surge in total federal indebtedness. 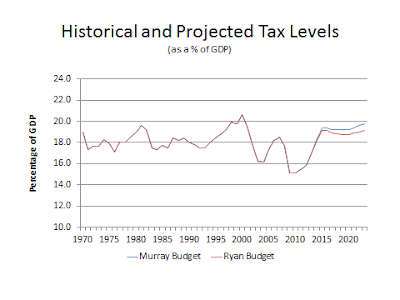 Taxes: Pursuant to the fiscal cliff legislation passed in January, future federal tax collections are projected to significantly exceed historical norms as a share of the economy. The Ryan budget does not revisit this agreement, leaving federal revenues essentially as now projected. Because the Murray budget seeks to return annual deficits to historical norms while maintaining elevated federal spending levels, it envisions raising taxes still higher. By 2023 the Murray budget aims to collect 19.8% of the economy in federal taxes, the third-highest level of annual federal taxation since World War II. Unlike previous tax high points, this would not be a temporary spike but would represent a permanently higher level of taxation facing younger generations.

Repeal of “Obamacare”: Though this summary focuses on general fiscal policy, one difference between the two budgets’ specific policy endorsements is too important to overlook: the fate of the massive new federal health entitlement (which some refer to as “Obamacare”) enacted in 2010. The Murray budget assumes its implementation while the Ryan budget embraces its repeal.

There are at least three important fiscal policy reasons to scale back if not eliminate this new entitlement. The first is simply that it is one of the largest contributors to an unsustainable rate of projected federal spending growth. A second is that it is necessary to ensure that the ambitious Medicare cost-constraints enacted in 2010 actually do enhance our ability to finance Medicare rather than being spent on a new program. And third it is needed to correct incentives, recently created under the 2010 health law, for both states and employers to shift people they are now insuring over to the law’s new health exchanges, potentially swelling their costs above current projections.

In sum, the two resolutions represent starkly different approaches to budgeting. The Ryan approach aims to balance the budget over ten years, accepting the terms of recent tax legislation while returning both spending and indebtedness closer to historical norms as a share of the economy. The Murray budget would continue current elevated levels of spending and indebtedness as a share of the economy, while raising federal taxes significantly above our historical experience. It will be interesting to observe how Congress reconciles these two contrasting approaches to the federal budget.'

To learn more, visit InstitutePublicTrust.org
Posted by Frank Hill at 6:35 AM