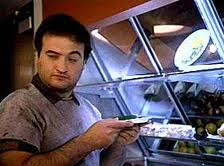 You know these great words as coming from one of the great songs ever by Sam Cooke officially known as '(What A) Wonderful World'. It serves as the unmistakable background music to the scene in 'Animal House' where John Belushi as Bluto Blutarsky goes down the cafeteria line and stuffs his face and pockets with all sorts of 'free food' apparently as part of a meal plan which will serve as our object lesson of the day.

This time about how we all seem to think that we can consume as much government largess as we want and no one ever seems to have to pay for it directly.

We do.  And will.  One day. In the form of higher taxes, inflation, higher-than-normal interest rates, depreciated currency or 'all the above'. Perhaps soon in the future if the EU collapses and the euro is dismantled and all sorts of havoc is wreaked on the world economy just for starters.

Sam Cooke's great song should be amended for most Americans then to this, especially when it comes to the federal budget and public policy finance:

As you read this, just keep the mental image in your mind of John Belushi going down the cafeteria line putting plate after plate of food on his tray in between squeezing enormous hamburgers into his mouth or slurping up green jello from the plate. You might want to click on the 'Wonderful World' link above to listen to as you read to keep your mood elevated.

We heard some simply astounding numbers about a recent surgery a friend of ours had recently and thought it would serve as a useful lesson for today.

We all know that knee and hip replacements have become almost as common-place as wisdom teeth extractions.  It is simply amazing to think that after a lifetime of wear-and-tear on these joints and excruciating pain in most cases that within the space of an hour or two, a skilled orthopedic surgeon can saw the bones above and below your kneecap, insert a new knee joint and then push the whole leg back together so that in a manner of weeks or months, a person can be playing golf or walking like normal people do.

God bless America and God bless American medicine and medical colleges!  We really do have one of the greatest medical systems the world has ever known in terms of medical advances and discoveries, wouldn't you have to agree?

We don't begrudge anyone wanting relief from pain and suffering.  If it can be relieved, more power to them.

However, do you know what the costs of these types of surgeries are nowadays?

In the case of private insurance plans administered by businesses or individuals, there are certain percentages of the premium an employee pays each month for the right to have such coverage when they need it in the future.  They also pay a deductible for such a procedure which could be substantial in these cases.

So in a manner of speaking, you and your private corporate employer have 'pre-paid' or 'invested' in a way to pay for your knee or hip to be replaced 30 years in the future if you are covered by a 'private' health care insurance plan.

In this case, though, the entire procedure was covered by Medicare.  $90,000.  Not private insurance.

Medicare is not a 'true' insurance plan where money is taken from your paycheck in the form of payroll taxes (as it already is on a weekly or bi-weekly basis) and 'invested' by an insurance company in some form of interest or dividend-bearing account that will be there to take money out of in the future to pay for your knee replacement.

Medicare (CMS) takes your payroll taxes paid this month and then pays out cash benefits next month to Granny or Grandpa when their surgeon sends that $60k to $90k bill to the Center for Medicare and Medicaid Services (CMS) formerly known as the dastardly 'HCFA'.

Since Medicare is fundamentally and technically bankrupt today, even that transfer of wealth from the younger working generation to the older generation is not enough to cover all these growing costs.

Hardly anyone will pay more in Medicare payroll taxes than they will receive in Medicare benefits unless they die before becoming eligible at age 65, die soon thereafter or live out their golden years in absolute picture-perfect health sans any major medical procedure. The fact is that roughly 85% of the Medicare Parts A and B programs are paid for by other taxpayers, not any particular individual enrolled in Medicare.

Couple these exorbitant surgical procedures with the fact that we are about to retire perhaps the most obese and unhealthy generations America has ever produced and you have a recipe for fiscal disaster when it comes to paying for the complications due to heart disease, diabetes, stroke and cancer in the next 20 years under Medicare as currently configured.

The mental image of John Belushi stuffing all sorts of food in his mouth is an apt analogy for where we as a nation have been in terms of doing whatever we want with our bodies in terms of diet or lack thereof...and then expecting someone else to pay for it all once on Medicare.

People who are currently eligible for Medicare should be taken care of, there is no question about that. They lived their lives under the assumption that Medicare as it was would be there for them in its present incarnation.

Plus, the obvious solution is to convert Medicare and Medicaid to provide true 'catastrophic coverage' to everyone in the nation to protect them against the humongous extended costs of a devastating head injury, cancer treatment, stroke or heart failure or similar long-term illness or situations.  Other coverage can be offered on a need-based basis or allow wealthier individuals the chance to buy-in on an income/wealth-related basis. Use the world's secondary and tertiary reinsurance markets to further diffuse the risk undertaken, perhaps even our old friend Warren Buffett's vast network of reinsurance companies.

The Medicare program has got to be reformed very soon to account for:

1) The vast differences in retirement income and wealth of millions of retirees.  There is no plausible, not-make-you-laugh-out-loud reason why Warren Buffett or Bill Gates should be subsidized by a $30,000/year blue collar worker for their SS or Medicare benefit.

3) The fact that more personal accountability for life decisions should be a part of Medicare than it is today.

If we solve the Medicare, and then the Medicaid problem, our fiscal budget problems start to dissolve almost overnight.  Holding the rates of growth in just these two programs to the expected rates of inflation in the next 8 years would reduce the amount of expected debt accumulation over the next 10 years by close to 50%.

No major other cuts necessary, no major tax hikes either (unless, of course the Bush/Obama Tax Cuts (Obama has already failed to veto their expiration once in 2010 so he now owns them as much as Bush ever did) are extended in which case we still have some major work to do to balance the budget in our lifetimes)

That is worth the effort, don't you agree?

Then we can all sing with Sam Cooke '(What a Truly) Wonderful World' America really can be when our budget deficits are slain and our medical programs are rationalized to meet the current economic realities we face.

To learn more, visit InstitutePublicTrust.org
Posted by Frank Hill at 5:28 AM