'Render Unto Caesar What Is Caesar's' 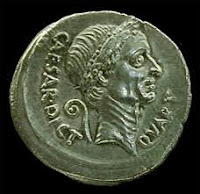 
'President Barack Obama on Thursday tied his proposal to raise taxes on wealthy Americans to his faith, telling leaders gathered for the National Prayer Breakfast that Jesus’s teachings have shaped that conclusion.

The rich should pay more not only because “I actually think that is going to make economic sense, but for me as a Christian, it also coincides with Jesus’s teaching that ‘for unto whom much is given, much shall be required,’” Obama said at the Washington Hilton, delivering remarks at an annual event that every president has attended since Dwight D. Eisenhower.'

Well, this brings up a lot of other verses to consider, doesn't it?

Now, politicians always have to be very careful when they are mixing Scripture with advocating public policy.  What about the confusion between 'church and state' here?  Didn't President Obama just step over the line by 'invoking' the Holy Lord by intimating that He thinks higher taxes on rich Americans is a 'good thing' to cure our budget deficits as if Jesus is some sort of OMB Director?

But more to the point, what do these verses actually tell us about the American Experience as a nation over these past 223 years?

That we are a nation of 'rebels' who don't look kindly on despotic leaders and rulers, that is what it says.

Here's what we mean:

Apparently, none of the Revolutionary Founders of this nation paid too much attention to the admonition to 'submit to the governing authorities' very well, did they?  What did they do?

They stuck more than their finger into the chest and then the eyes of King George III and told him through a bloody war (which anytime really is 'politics by other means) to go stuff it somewhere and don't ever bother us again.

And then, they did something truly amazing.

They wrote a Constitution of self-rule that completely eliminated any vestige of single person rule in America.

No, not the one we live under now.  The Articles of Confederation, adopted in 1781. The 'first' Constitution and the one that coined the phrase 'The United States of America' for the first time.

So, in God's eyes, who then became the 'governing authority' under which to submit and pay taxes and do other things the 'government' ('of the people, by the people, for the people'...you know, what Lincoln said at Gettysburg) told them to do?  Who is the 'Caesar' now?

You see the difference? It is one thing to have a single person make decisions for the rest of us all based on his/her personal feelings and predilections.

It is an entirely other thing to have a group of people hammer out a deal under which they know themselves that they are going to have to live under the rules they hammer out and then return home to face the approbation or the disgust of their many neighbors and friends who live near them, not across the ocean or in Washington, DC far removed from the 'real world'.

We think President Obama has made the mistake in assuming that we live in an America under the rule of a 'Caesar' or at least a very powerful President during his term in the White House.

To some extent and to be fair about it all, the power assumed by the President has been steadily escalating over the past 80 years since FDR took the reins of the White House during the last (but far more severe) Great Depression in 1933.  Ronald Reagan consolidated power during his term in the White House through his charm and personality and George W. Bush did some things that still give us heartburn to be honest about it.

But we really don't live under a Caesar and never have. We don't live in a nation ruled by a King, a czar, a potentate or even a Grand Poobah of the Loyal Order of Water Buffaloes like in the Flintstones cartoons.

We live in a democratic republic where we are supposedly ruled by fellow citizens who are supposed to argue, debate, scream if they have to over policy differences in Congress and our state legislatures....and then come to some reasonable compromises and conclusions and go home.

The problem is that Americans seem to have become inured to the idea that The President and the Executive Branch of our government is far more important and powerful than the Congress (of the People) is. Take a look at this chart and see what we mean.

Maybe this 2012 presidential election cycle is a good time to discuss, maybe at least for 10 minutes in one of these interminable debates, the proper role and perspectives on self-governance nowadays.

The Founders spent 13 years in, first, a bloody, protracted war on the battlefields and then heated debates in the councils and pubs over what to do next between 1776 and 1789 to set up what they thought was the 'ideal' structure for people to govern themselves in a free society.

We think now that the 'governing authorities' are ourselves, and not a Caesar, that it is time we start acting like we care about what is happening to our nation and get involved in some tangible worthwhile manner this election cycle.

Like maybe you running for some elective office for example or at least coughing up some significant dough for candidates who do have the courage to run for something.

'Rendering Unto Caesar' when you are actually the 'governing authority' takes on a completely different light, doesn't it?

To learn more, visit InstitutePublicTrust.org
Posted by Frank Hill at 4:54 AM