The Pyrrhic 'Victory' (sic) of the Tea Party...and Progressives and President Obama 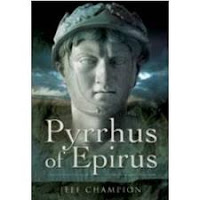 Nobody ever won a war with a string of Pyrrhic victories.  You remember King Pyrrhus, he who 'won' two major battles with the Romans only to 'lose' in the long run because he ran out of men?

Just like no football team ever won the national championship with a string of 'moral victories' (meaning 'close losses'. see Duke University, circa 2011).

We try to give you as much information, some off-the-wall admittedly, but important nonetheless, so you can make your own decisions about political goings-on in Washington.

Or plan to hunker down in a bunker somewhere with a hoard of gold, food and water and wait til this 'madness' is all over and done with.

Unfortunately, it is not 'over-and-done' with. Not by a long shot.

Did the Tea Party 'win' by the lack of an agreement by the now disgraced 'Super' Committee? How about the Progressive Liberals...did they 'win' anything due to the lack of any agreement?  How about the GOP in the House and President Obama...do they now look like heroes or chumps in the eyes of the vast majority of the American populace, those who can still think and see things clearly and are not totally blinded by the poison of partisan politics on every single issue?

Let's look at this objectively as if you just landed on earth in a space ship:

The over-riding #1 Problem We Americans Face Today?  The Profound Budget Deficits And Debt.

Did anything that happened, or failed to happen, over the past 3 months, 6 months, 12 months, 3 years do one darned thing to stop this problem or even arrest its acceleration any at all?

If the question is posed as this: 'Are we any closer to solving the debt explosion now than we were in the past 3 years?', the answer is a resounding 'NO!', isn't it?

We are being run as a nation by 536 collective 'failures' right now to address the biggest threat to our economic and national security we have seen since the Great Depression and WWII.

Our father and grandpas 'saved' the world from the Nazis and Imperial Japan in 4 years. Their generation of 'real' leaders made a lot of very difficult, tough decisions very quickly and they all made a huge sacrifice for the good of the nation. Many chose to enlist in the armed services when they knew they might not be coming back to their homes and family.

We, our current generation, have been running our great nation into the turf for the past 10 years now by not being smart about our fiscal decisions in Washington.

How does that make you feel when you read this blatant fact?

We need people to represent us in Washington who will 'solve the problem' and not worry so much about whether they are going to be re-elected or not.

Memo to All Current Incumbents in the White House, the US Senate and the US Congress: 'You are not that important! Especially not when you fail to solve our most pressing issues.'

You can be replaced. And you should. In 2012. In the primary or the general election by someone who can and will cut the deals necessary to solve our fiscal problems.

Take a look at the following chart based on most recent CBO projections of our debt with and without the sequester. This is the 'actual' debt outstanding to the public that has to be paid each month with 'real' interest payments, not the 'fake' intragovernmental debt like the so-called Social Security 'Trust Fund' that is never really going to ever be paid by with real money: Despite the hand-wringing you are going to hear from all sides about the draconian cuts to their favorite part of the federal budget, the outstanding federal debt is expected to go up by close to 30% over the next 10 years.

So it is a little hard to believe that the cuts are going to be so terrible when the debt is still going up 30%, isn't it?

How can anyone in the Tea Party, the GOP, the White House or in the Democratic-controlled Senate claim 'victory' in the aftermath of the Super Committee and Congressional 'Failure' recently?

People in the Tea Party and the GOP will claim that 'Well, we prevented taxes from going up!' That you did.

People on the progressive liberal side of things, including President Obama will shout at the top of the rooftops: 'We saved Social Security, Medicare, Medicaid and every single domestic discretionary program we all love to grow and expand!' That you did as well.

But claiming 'victory' on such matters when our nation is at total risk of becoming the next Greece, Portugal, Spain, Ireland, Italy or Zimbabwe due to excessive debt and possible hyperinflation (it can happen you know, and when inflation does rear its ugly head out of that snakehole, there is zero legislation that can be passed to arrest it), then that is truly a Pyrrhic 'victory' (sic) by anyone in Washington now associated with the Tea Party, the GOP, the Democrat Party and the White House.

We have a US Congress, Senate and White House now made of up of people who apparently do not understand: 1) how to win 'The Big One!' or 2) The immense gravity of our current situation.

The main question you have to ask each incumbent when you see them on the campaign trail is this:
'Have you done anything that will reduce the future deficits and accumulation of debt by 1 penny?'

And since the answer so far is 'NO!', you can shake their hands and say: 'So long. It has been so nice to know you.'

As we said at the outset, it is up to you to decide what to do with the information we give you. Like run for office yourself and/or vote for a solid reasonable candidate opposing these 'failures' in the primaries and general election of 2012.

It is up to you. We don't have time for any more 'Pyrrhic victories' by any side of the political spectrum.
Posted by Frank Hill at 9:07 AM