Is It OK To Vote For A Mormon For President? 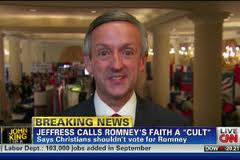 Well, since Pastor Robert Jeffress has opened this can of worms, we might as well put in our two cents about it.

So should you.Especially if you are a serious bonafide Bible-believing Christian.

What is it about voting for a 'genuine' 'born-again' 'follower of Jesus Christ' that makes anyone more special to be President of the United States of America?

How about voting for a Jew for President?  He/she would be part of the Judeo-Christian heritage we all say we share.

A Hindu? A Rastafarian? A Muslim?

Was Jefferson a Deist or closet atheist? Was Catholic President John F. Kennedy going to take his marching orders from the Pope? Is Rick Perry going to become Elmer Gantry if elected to the White House? Does Mitt Romney’s Mormon faith somehow ‘disqualify’ him from running for President?

What a president thinks about creationism versus evolution is almost immaterial to his or her conduct as Chief Executive Officer of this great land. Is a 'President Rick Perry' all of a sudden going to be able to snap his fingers and mandate that every public school in this country drop any mention of Darwin or evolution and focus solely on the Biblical accounts of creationism?

Heck no! Why do you think every state has its own legislature and each community has its own elected officers? They get to make local decisions on things like public education, not the President of the United States.

We think a man or woman’s personal faith is important if they decide to get into the public arena. We think it is helpful to know if someone running for the elective office in our great land thinks ‘they’ are the source of all knowledge and reason on earth or if they are accountable to a ‘Higher Order’.

But we also think the Constitution is pretty clear on this subject. The First Amendment guarantees every person the freedom of religious expression as they see fit to choose. They can howl at the moon and worship the dung beetle in Africa if they so choose. (don't laugh, there are people who do)

Article VI clearly states '...no religious Test shall ever be required as a Qualification to any Office or Public Trust under the United States.'

We should fear the state-imposed religion more than whether a non-Christian gets elected to be the Chief Executive of our nation.  He is not elected to be a 'king', no matter how much they want you to think they are the next incarnation of the Sun-King or a descendant of Zeus.

The Founders saw the President as the tool to implement the policies they germinated and passed.  Not the other way around.

The Founders treasured religious freedom to the nth degree. And why shouldn’t they? Many of them were descendants of people who fled English and European persecution of them solely for their deeply-held religious beliefs.

Thomas Jefferson has 3 things inscribed on his tombstone:


‘Author of the
Declaration of American Independence
of the
Statute of Virginia
for
Religious Freedom
and Father of the
The University of Virginia’
In that order.

It strikes us as overkill the amount of time and attention we collectively spend on examining any candidate’s religious beliefs or lack thereof.

Here's one area where someone's religious beliefs have not mattered very much when it comes to 'solving it', has it?

As hard as it is to believe, just because someone is a person of faith is no indicator of whether they know how to vote to balance the federal budget, or any other budget for that matter.

We do have a very serious problem with is the misguided notion that just because someone is a person of faith (take your pick), they also know how to balance the budget.

How do we know this to be true?

‘As evidence, we present Exhibit A-1, Your Honor….the last 10 years of financial imprudence in the US Congress and around the state legislatures in the United States of America.’


It is sinful, truth be told and admitted and confessed to the Lord.  A great paraphrase of the Lord's Prayer might indicate our current attitude towards debt, both federal and personal:


'Forgive us our national debt, Lord!  But Not Just Yet!'  (with apologies to St. Augustine)

99% of all elected officials in Congress declare themselves to be Christian, Catholic or Jewish of some denomination, sect or order. The sole Muslim in Congress has only been there for 2.5 terms....and he has not done much better in terms of voting for fiscally sane positions either!

As long as each representative brings some real-world expertise education and experience to the table, we do not care if all of the Christians, Jews and the sole Muslim now serving in Congress hold hands and sing ‘Kumbaya’ around the Capitol flagpole every day at high noon as long as they can solve the very pressing public policy questions before them.

Such as balancing the federal budget and reducing the $14.7 trillion national debt before it explodes to $25 trillion. Just to name two.

Just because there is the Book of Numbers in the Bible does not mean that Christian and Jewish politicians know how to balance the budget. They obviously have no clue today, do they? The results speak for themselves.

Mitt Romney might be the greatest president we could ever elect to help get us out of this economic and fiscal mess in which we are now mired neck-deep.  He has all the business background to do the job.

And if you know nothing about Mormonism, think on this: The unemployment rate amongst Mormons is probably close to zero.

Maybe we Christians. Jews, Muslims and Rastafarians can learn something from them.