Everyone Has Their Price: Ask Lady Astor 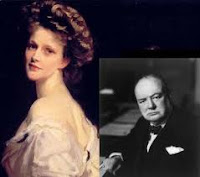 Winston Churchill had the most tempestuous relationship with a female 'friend', Lady Astor, that could be had without being officially married.

She called him a ‘drunk’ one night at a dinner party. He replied, ‘Lady Astor, I may be drunk now but in the morning, I will be sober. You, on the other hand, will still be ugly!’

In perhaps an apocryphal tale, Churchill made the following proposition to Lady Astor:


"Would you sleep with me for a million pounds?" Churchill asks.
"A million pounds?" says Lady Astor. "I’d have to think about it first but, in all likelihood, yes."
"How about for a six-pence?"
"Why I never!" Lady Astor huffs. "What do you take me for?"
"That, my dear," says Sir Winston, "has been established. We are just negotiating price."

Everyone in politics ‘has their price’.  It just has not been 'found' yet in Washington apparently.

We may be heading to the point where the world financial markets start to inflict their verdict on the inaction of Congress and the White House to deal constructively with our budget deficits and debt.  That may be the only way both sides see the downside to their inaction and intransigence, and unfortunately, so will every single American citizen and family.

Every person has their own internal divining rod that points straight down when they see themselves over the mother lode they are most interesting in finding. For some, it is the vexing issue of abortion.  To others, it is the environment.  For others, it is protection of the social welfare safety net.  And to others it is the level of taxes, for you and others in the society.

What is the issue that grinds your gears the most? Cooks your grits? Drives you bonkers?

What would it take for you to 'compromise' on a core principle and accept a deal that would get you something else you really wanted just as bad or more?

We live a pluralistic democratic republic where it is very difficult, if not impossible, to achieve 100% of what you want in any legislative session. Unless your side has 1) The Majority in the House; 2) The Majority in the Senate; and 3) The President in the White House, it is impossible to get close to what you want.  President Obama and the Democrats got Obamacare passed in 2010 because they held the keys to all three levers of the legislative process, and got promptly thrown out of control of the House in the November elections in a rout of biblical proportions.

If you wanted Social Security reform to the tune of $4 trillion as was mentioned by President Obama last week, would you be willing to accept any tax increases on anyone at all?

If you really wanted to pass higher taxes on the wealthiest Americans, would you accept these Social Security reforms to do so?

If you are unwilling to compromise on any front, you are essentially saying you are OK with never-ending deficit-spending and accumulation of debt at unsustainable levels. That is what has been done in Washington for close to 27 of the past 30 years in Congress and look at where that has gotten us today.

We can no longer afford or risk accumulating never-ending amounts of national debt that will soon be refinanced at every-escalating higher rates of interest.  The average rate on all American government bonds now is about 3%.  What happens if foreign investors get the slightest bit 'skittish' about buying US debt and demand 6% to hold the debt? 9%? 21%?

Don't laugh.   Anyone over the age of 21 in 1980 can remember 21% interest rates in America and what it does to homeownership and buying cars and household appliances. It is crazy.

What if you knew beyond a shadow of a doubt that passing a massive compromise budget deal meant the solvency of the American dollar and economy and long-term economic health and growth for every one of the 310 million citizens now living? Would you 'take it' as long as you achieved at least one of your top 3 legislative priorities?

You may have heard of the most recent 'collapse' of the budget negotiations in Washington over the debt ceiling issue. We are sure you are going to hear about this for the next three weeks and perhaps longer.

Our guess is that the debt ceiling will be lifted in 'small' increments, small for Washington, that is.  Like maybe $1 trillion or, 'surprise, surprise!', just enough to get the government through to November 7, 2012 or one day AFTER the next congressional and presidential elections.

Imagine that.  Just long enough to be able to kick the debt can one more year down the road towards being completely financially irresponsible and force the tough decisions on our children and grandchildren.  Again.

There probably will be smoke-and-mirror 'spending cuts' in it akin to the last time a measure passed Congress on April 9, 2011 to avert a budget shutdown which really did not amount to much when all was said and done. If you see the words 'reduced budget AUTHORITY' instead of 'reduced budget OUTLAYS' (or appropriations), then you will know we have been scammed again and nothing of much consequence will have happened on the budget deficit front.

It is hard to figure out just exactly what President Obama offered by way of the $4 trillion in savings in Social Security without the details which were scanty at best and probably back-loaded into years 8,9 and 10 down the road in return for any tax hikes upfront immediately.  That is always a 'bad deal' no matter how you slice it.  Take a look at ObamaCare:  Tax hikes front-loaded and higher spending after year 3 for as far as the eye can see.

But we really are in uncharted economic waters right now.  Are the Democrats and Republicans both seriously considering playing a game of chicken with each other and not compromise on a major deficit-reduction package that the markets around the world are eagerly awaiting?

Behind Door #1 is inflation.  Door #2 has higher interest rates behind it.  These are the two probable outcomes if the US does not pass a serious budget deficit-reduction package very soon.  Is either party willing to take the blame for one or both outcomes in the absence of a major deal on the debt ceiling?

The Pelosi/Reid Democrats have already declared that nothing in the entitlement area of the budget can be touched or altered or reformed...ever. Are they serious?  Nothing in these reforms would affect 1 senior now living who is over the age of 66; they would all be applied to seniors coming of age in the next 10 years, not today.

Consider this question if you are an anti-tax Republican: ‘In return for cutting the federal government in half, would you be willing to raise income taxes by $1 on every American citizen, including the wealthy and the 50% of the populace now not currently paying any income taxes at all?

We have already heard from several well-meaning patriots and folk who have outright said they would reject that ‘deal’ as a violation of their tax pledge. Even if it meant that federal spending was cut in half across-the-board, the budget was balanced and it meant that further tax cuts could be made once the government was cut in half.

Like Lady Astor must have been when propositioned by Sir Winston Churchill.
Posted by Frank Hill at 3:16 PM