Meditation on the Divine Will 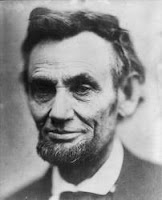 'The will of God prevails.

In great contests each party claims to act in accordance with the will of God.

Both may be, and one must be wrong.

In the present war it is quite possible that God's purpose is something different from the purpose of either party--yet the human instrumentalities, working just as they do, are of the best adaptation to effect his purpose.

I am almost ready to say this is probably true--that God wills this contest, and wills that it shall not end yet.

By his mere quiet power, on the minds of the now contestants, He could have either saved or destroyed the Union without a human contest.

Yet the contest began.

And having begun He could give the final victory to either side any day.

Yet the contest proceeds.'

Regardless of where you stand on any political issue, or have any religious faith or none at all, President Lincoln's private ruminations on the nature of current struggles ring true today, just as they did 149 years ago.

Maybe we are all supposed to learn some humility, or civility, or an ability to be more persuasive with each other in a peaceful manner with a pleasant countenance rather than resorting to ridicule, innuendo and hate-filled speech towards people with whom you might disagree.  From all sides of the political aisle.

More people died in the American Civil War than in all other American wars combined, including the current wars in Iraq and Afghanistan and the War Against Terror.  Maybe God wanted them to 'try a little harder' before resorting to bloody warfare to settle their differences.

Maybe 'Old Honest Abe' was onto something.  Something to think about on the 202nd anniversary of his birth.
Posted by Frank Hill at 7:46 AM