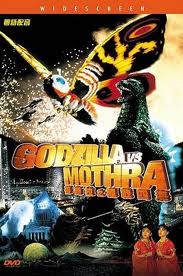 There is really not much difference between Republicans and Democrats when it comes to economic policies, is there?

They both focus almost solely on how to pass their upfront policies 'get this economy moving again!' so we can 'create more jobs, jobs, jobs!'

And truth be told, both parties love to cut taxes and increase spending, but just by different degrees and amounts.  They want to get re-elected...what did you think they would do?

We think that a new economic phrase needs to be coined to lump them all in together so remember you heard it here first:

Think of it as sort of a bad Japanese B-grade sci-fi movie like 'Godzilla Vs. Mothra':

Here's the definition of the phrase from a historian in 4010 AD:  'a myopic tunnel vision focused solely on making the citizenry of the United States happy, circa 1980-2010, by giving them all the tax cuts and spending programs they wanted without any regard for the massive overspending and buildup of debt and concomitant interest payments that eventually suffocated their economy'

In short, 'Supply-Side Keynesianism' prevented elected leaders from seeing the forest burn down around them as they tried to water their favorite special-interest saplings'

Honestly, all we have done for the most part since 1980 with the GOP tax cuts and things like the Obama Depression-era ‘jobs stimulus infrastructure not-so-shovel-ready programs’ has been to focus on the ‘supply’ (production) side of things.

Mainly because those are the two ‘easiest’ things an elected official can ever do: 1) Cut Taxes! and 2) Jack Up Spending!.

Almost everything we have done as a nation lately has been to focus on the ‘production side’ of things and how to stimulate the creation of more jobs and more wealth, which, in and of itself in isolation, is a great thing.

When you really think about it, what we have managed to do as a nation over the past 30 years now has been to double the fuel for economic expansion from 1980-2007.

Tax cuts PLUS bounteous more federal spending to the tune of an average increase of 8% per year since 1980? It is almost amazing to believe that we had ANY economic downturns in 1987, 1990 or 2002 ever with that sort of fiscal stimulus being pumped into the arteries of America's economy.

And then it popped, just like a helium balloon right before our very own eyes in 2008, didn’t it?

We think the problem has to do with the distortions that have been inadvertently (is there such a word as ‘advertent’ anyway?) placed into our federal tax code over the years. We have offered so many inducements, tax and subsidies, to encourage home and commercial property ownership that it is no wonder we had a glut of McMansions and office space from 2000-2007.

We have loaded up businesses with regulations and taxes upon regulations and more taxes that it is hardly any wonder many American businesses have fled the country to set up operations (and take with them ‘jobs’) overseas in China and South America.

My wife started a cotton bowtie business recently and had to pay 10 different fees and taxes before she sold 1 bow tie just to get started!  Is that the way to foster free enterprise in America, home of the free and the brave, in the 21st century?

And the major over-riding problem is that while we have attacked the problems of the ‘supply-side’ or ‘production’ side of US economy with repeated injections of adrenaline and at times, crack cocaine, we have never systematically dismantled the monolith called the ‘US Federal Government’ by even 2 teensy, tiny bricks.

As far as we can tell, going back to the halcyon days of President Ronald Reagan, we have successfully removed precisely ONE federal program…the Federal Helium Reserve Program which was passed into law in 1916(!) to service surveillance dirigibles for WWI era warfare.

Federal programs are so addictive they remind us of the ending lyrics to the great Eagles song, ‘Hotel California’…. ‘You can checkout any time you like. But you can never leave!’

Once a federal program is passed into law, it just never ends, does it? (It doesn't)

So we can fight all we want about whether to cut taxes or increase spending to get out of this hellish recession…that is an important debate to have.

But the one critical issue we have to all come together on and agree to is how to curtail the overall growth of federal spending to less than the expected rates of inflation going forward for the next decade or two or three or four.  This will allow tax revenues to grow with the expected rate of growth in the economy to cross the spending lines and then be used to pay down this enormous debt.

‘Supply-Side Keynesianism’ just won’t work unless the same people who support those economic growth policies also grow some courage and stop spending more money on every single bright idea they have under the sun. We will never have economic growth that will generate enough tax revenues to out-run our current commitments under Social Security and Medicare...it is just not in the cards despite what politicians try to tell you.

We are crushing ourselves under interest debt service payments we do not need to incur and national debt amounts we can not afford to have any longer.

Let’s go for a couple of decades of good old ‘Demand-Side Spending Restraint’ first and foremost.