The following is not a parable or allegory; it is a true real-life account. All names were changed to protect the innocent and any reference to other political figures either currently living or dead is purely coincidental)

(“In the beginning), 'The Leader' set in motion a plan to effect a revolution and bring about constitutional change, because he could see no point or benefit in piecemeal legislation rather than a fresh start, just as in dealing with a body which was in a terrible state, riddled with all kinds of diseases, one would first eliminate and alter the current blend of the humors by means of drugs and purgatives and then begin on a new regimen.

The second, and most revolutionary of 'The Leader’s' constitutional reforms was the redistribution of (their property). In order to banish arrogance, envy, crime, luxury and those chronic and serious political afflictions, wealth and poverty, 'The Leader' persuaded the people to pool all their (property) and then redistribute it all over again so that everyone would live on equal terms and with the same amount of property to provide an income. In the future, the only ascendancy they would seek would be assessed by the criterion of excellence, on the basis that there was to be no difference or inequality between any one of them and another except as determined by criticism of shameful deeds and praise of noble ones.

And when 'The Leader' saw that people were not prepared to tolerate the direct confiscation of their goods, he took a circuitous route to the same end and attacked their greed by political means. First 'The Leader' revoked all gold and silver coinage and made iron the only legal tender; then he gave even a considerable weight and amount of iron such a low value than ten (dollars) worth needed a large storeroom in one’s house and a (transport truck) to transport it…

Once luxury was deprived of the things that enliven it and nourish it, it gradually wasted away of its own accord, and there was no advantage in owning a great deal of property because wealth had no means of displaying itself in public, but had to stay shut up in the idleness of home….

Now, 'The Leader' intended to eradicate admiration of wealth altogether, so he increased his assault…The upshot was---and this is how everybody put it---that (His Country) was the only (nation) in the world where Wealth could be seen as truly blind, lying as lifeless and inert as a picture.” 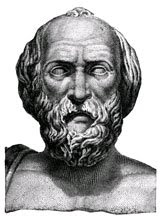 (The preceding is a direct lift from “Lives” by Plutarch, with certain modern editions to make it relevant to today's world. It was written in the late first century A.D. about a true historical figure, Lycurgus, and who was the leader of Laconia along with his disciples between 750 to 1000 years previous. Under the Lycurgan Constitution, the community later developed into the society we now know as the Spartans)
Posted by Frank Hill at 6:59 PM