Don't Look At These Charts On An Empty Stomach 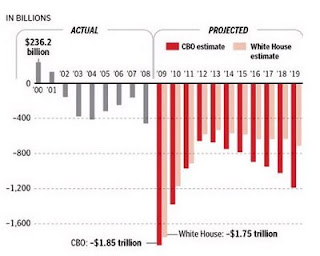 Don’t look at these charts to the left on an empty stomach…..or a full one, either for that matter.

The updated numbers came from the CBO mid-year report that was produced last week. Now that the FY2010 President’s Budget has been released, CBO was able to make more definitive estimates of the effects on the budget deficits for the next decade.

As you can see, there is more dark red ink from the independent CBO estimate than from the President’s OMB Director, as is the norm in any White House. OMB reports are always more optimistic about economic forecasts than CBO because, well, they are appointed by the President and every President wants more of a “rosy scenario” than CBO.

This updated estimate does NOT assume any net effect on the deficits due to the health care reform now under discussion in Washington. The President has said that all of his health care reform proposals will be paid for by savings elsewhere in the budget plus additional revenues such as tax increases on soda drinks and sweet, fattening foods.

So I guess that violates his “No Tax Increase on Middle America” pledge, both in a financial and figurative sense.

If the cost of expanding health care through the so-called “public option” now being discussed does not wind up costing 2 or 3 times as much as the first CBO estimate of $1.6 trillion for the Obama Health Care Plan, then it will be the first and only federal health care plan ever passed by Congress that has not exploded in scope over time. We are already over $50 trillion in unfunded liabilities on a net present value basis for the existing federal health programs as it is….what is another $3-$4 trillion amongst friends?

Just wanted to give you an update on where your money is going. And your children's. And your grandchildren’s. And the Chinese while we are at it. It looks like we are going to have to keep buying Chinese-manufactured goods forever so they can keep buying our debt, now doesn’t it? Is that a Faustian bargain or what?